Everyone Wants to Be Irish on St. Patrick's Day

Follow a professor's journey to trace his genealogy back to Ireland and what it means to be Irish. 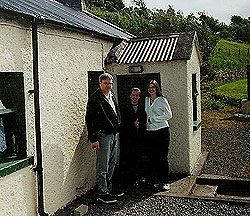 John McGlone and his daughters outside of their ancestors' cottage in Ireland. (Click image to enlarge.)

Though many people can say that one or more of their ancestors were Irish, usually they never bother to find out more about their Irish roots.

For John McGlone, professor of animal and food sciences, knowing he is Irish just wasn’t enough. He wanted to find out more about his ancestors and truly embrace his Irish heritage.

“I thought we should try to find out where exactly our relatives came from and when they left in different years,” McGlone said. “So off I went. What’s interesting about the Irish people is that there is simultaneously a need for community and a need for dispersion. Millions of families left Ireland for that very reason.”

Over the last few years, McGlone has diligently constructed a family tree of his ancestors that accurately dates back to the early 1800s. He has traveled to Ireland numerous times and taken pictures at the cottage where his great-grandparents lived.

McGlone said one of the early difficulties he had came from his traditional family’s habit of passing names down through the generations. McGlone was named after both his father and his great-grandfather’s brother. To add to the confusion, McGlone’s great-grandfather, Daniel, married a woman named Mary, and together, they had McGlone’s grandfather, Patrick. Mary died in childbirth and when Daniel remarried, it was to a woman named, ironically, Mary.

“The family joke is that they didn’t have to change the towels, because they still said Daniel and Mary,” McGlone said. “This Mary/Mary thing threw us off for years.” 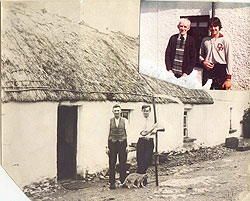 The McGlone cottage in 1932 with Daniel McGlone, John McGlone’s great-grandfather, and his nephew. The inset is from 1980 and it shows Daniel McGlone (left) with his great-nephew. (Click image to enlarge.)

McGlone said it was important to him to recognize his Irish heritage, which connected him to a vast community of people whose families all experienced the same struggles.

“To be Irish, at least for me, is to be someone who likes people, someone who has very strong roots in the old country, and someone who can live anywhere,” McGlone said. “I have met Irish people all over the world.”

McGlone also said that many Irish stereotypes are sometimes a little off the mark, but most of the time they are based on at least a little bit of truth.

“Irish are creative, that’s true,” McGlone said. “I think they’re very passionate. They like music, that’s for sure. And they’ll take any excuse to have a party.”

It’s no wonder everyone wants to be Irish on St. Patrick’s Day.

Create your own family tree: