Award-winning jazz artist Bob Dorough will perform a collection of his works on April 15. 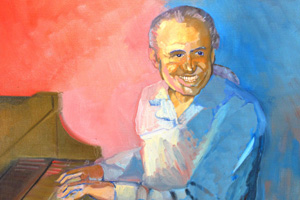 Bob Dorough, who is known as the only singer to record with Miles Davis, is a Governor’s Artist of the Year award recipient and an Arkansas Jazz Hall of Fame member. Photo courtesy of Suzanne Cerny.

“Schoolhouse Rock!” creator and former Plainview native Bob Dorough will perform a mixture of music from his jazz and pop-culture careers during a concert at 7:30 p.m. April 15 at Hemmle Recital Hall. The event is hosted by the School of Music.

Dorough, born in Arkansas and reared in Texas, fell in love with music after joining the Plainview High School Band. He attended Texas Tech in 1942 and 1943.

After earning a bachelor’s degree in music in 1949 at the University of North Texas, he moved to New York City where he attended Columbia University and immersed himself in the volatile jazz scene – the Bebop revolution.

He is known as “the only singer to record with Miles Davis.” While this may not be 100 percent true, he did record two vocals with Davis in 1962 – “Nothing Like You” and “Blue Xmas,” both of which he composed.

In 1971, he received a commission to “set the multiplication tables to music.” This led to ABC-TV’s “Schoolhouse Rock!” Saturday morning cartoon series that aired from 1973-1985 and entertained and instructed generations of children .

The impact of this media exposure was unpredictably immense. The show came back for another five years in the ’90s and is now enjoying its 30th anniversary with a DVD edition of the entire, five-subject series, for which Dorough worked as the musical director.

He has received the Governor’s Artist of the Year Award in Pennsylvania and is a member of the Arkansas Jazz Hall of Fame.

Schoolhouse Rock! began as a commercial advertising venture by David McCall. The first song recorded was "Three Is a Magic Number" written by Bob Dorough.