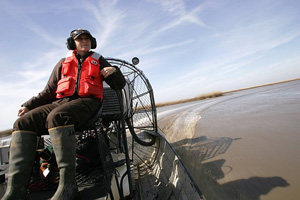 Jena Moon works as a wildlife biologist with the U.S. Fish and Wildlife Service. Photo courtesy of Steve Hillebrand.

It’s midnight in the humid, sticky, and insect-infested area known as the McFaddin National Wildlife Refuge near Port Arthur. The pitch-black night hides poisonous snakes and alligators. The reptiles have emerged from their daytime hiding places and are waiting motionless in the murky water for unsuspecting rodents and animals to wander too close.

In an airboat is 28-year-old Jena Moon, who tonight is intent on finding American alligators and getting closer to them than most rational humans would want to be. This may not be a typical job for a young woman from Buffalo Gap, but Moon believes this dangerous assignment is the best part of her job.

“I really love coming out here.  It beats sitting behind a desk all day,” said Moon, a wildlife biologist with the U.S. Fish and Wildlife Service. “Besides, I grew up more of a tomboy – always tagging along with my older brothers. We would hunt, fish, backpack and catch lizards and snakes. I pretty much did everything they were doing.”

It may be those skills helping Moon on this night as she loads up supplies and hitches an airboat to her pickup for another late night mission on the refuge, which is home to countless species of wildlife including waterfowl, mammals and reptiles. 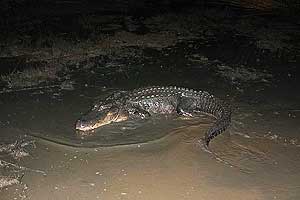 Moon and her team catch and tag the alligators in order to track gator movements across the marshes along the coast. Photo courtesy of Ellen Stutzenbaker.

“I grew up in West Texas, and we obviously didn’t have any alligators out there,” Moon said of her childhood. “Learning how to catch and tag them was different, but it wasn’t too hard. I was timid at first, but I just watched other people do it a few times until I felt comfortable. It isn’t rocket science, but I’m always cognizant of the danger.”

Moon graduated in 2002 with a bachelor’s degree and in 2004 with a master’s degree in wildlife management from the College of Agricultural Sciences and Natural Resources. For the past two years, she has conducted research on the relationship between alligators and Mottled Ducks who cohabitate in the marshes along the Texas Gulf Coast. Collecting data means shining a spotlight on the alligators to temporarily blind one of the up-to-10-feet long reptiles so that Moon can get in close enough to put a noose around its neck.

“A lot of them will put up quite a fight at first, but they get tired after a few minutes,” Moon said. “It doesn’t hurt them. Then we put a rubber band on their mouth and bring them up on the boat to take a series of measurements. We also plant a pit tag in the gator – a sub-dermal tag just like the ones that can be implanted in pets. This allows us to track gator movements across the marsh. These animals can move very fast in the water and have amazing homing abilities.”

Also on the to-do list for tonight will be satellite tracking of Mottled Ducks. Like the alligators, the ducks are easier to locate and tag at night.

“We go out at night primarily because it’s easier to catch the animals,” Moon said. “During the daytime, they’re easily spooked and they can see a long way. With the ducks, we’re able to get up on them closer and shine spotlights in their eyes to kind of blind them so we can catch them.”

Moon and her team are using about 15 satellite radios that they previously attached to the ducks to track their movements and habitat use. GPS coordinates relayed from the transmitter on the duck’s back tell the areas the ducks have been using as habitats so scientists can better manage for them on the refuge. On this night, Moon plugs in the numbers and aims the airboat in the direction of the coordinates to find those areas.  Since the satellite technology is expensive, scientists also rely on a cheaper banding process. This involves catching the ducks and putting a metal ID band around their leg. So far, thousands of ducks have been banded so scientists can track age, sex and survival rates.

In addition to learning how the ducks and alligators cohabitate, Moon and other scientists are monitoring duck levels since Hurricane Ike hit the area in 2008. The hurricane destroyed much of the marsh habitat and plant life when the storm’s surge doused the area with salt water.

“It’s been a lot of work, and we’ve spent the last couple of years dealing with the after effects of Hurricane Ike,” Moon said. “There have been lots of long days and nights spent out here on the marsh.”

Moon admits much of the work she does is not glamorous.

“There are no amenities and the bugs get very bad out here in the summer, and the winter is really cold. There are things you can do to make it more comfortable, but it’s just one of those things you have to deal with. You have to have kind of a gritty edge to be able to handle all the stuff we handle,” Moon said.

Finally about 3 a.m. Moon aims her airboat back to the pickup after a successful night of tagging ducks and alligators. It’s all in a night’s work.

“The work we do is very important because there are very few people who are managing large landmasses anymore. We have to work to conserve what we have left of the coastal marshes before they’re gone. They’re a critical part of our ecosystem.”

The Bachelor of Science in Wildlife and Fisheries Management (Wildlife Management Track) is a degree program that produces graduates who can be certified as wildlife biologists by the Wildlife Society. Students graduate with a working knowledge of wildlife biology, wildlife ecology, population management and habitat management.

Following completion of this degree program, one will be qualified as a wildlife manager, wildlife consultant and wildlife biologist with the U.S. Fish and Wildlife Service, Texas Parks & Wildlife Department or as a game biologist with a private firm.