From its buildings topped with red tile roofs, to the ornately decorated structures, Texas Tech is known as one of the prettiest university campuses thanks to the vision of the master builders.

The Southwest Collection/Special Collections Library is the largest rare-book library in 130,000 square miles. The major historical repository and research center spans 78,000-square-feet and includes oral history, photograph and audio-visual collections, the personal papers of some of the country's most prominent writers and more.

Browse through University Archives or Digital Collections online. You'll be amazed at what you discover.

Sowing the Seeds of Tradition

Make Mine a Double T

In 1923, the Spanish Renaissance style of architecture became the blueprint for almost every building on campus, to represent the southwestern history of the region. See some of the architecture around campus here.

Ornate columns, decorative window structures, archways and pilasters look as though they came from some of the greatest architects Spain has ever known. Amazingly, the Spanish Renaissance-style architecture of Texas Tech University’s buildings was made here in West Texas. The red tile roofed masterpieces stand as a testament to the craftsmanship that makes Texas Tech one of the largest and prettiest campuses in the United States.

The Spanish Renaissance style of architecture became the blueprint for almost every building on campus, to represent the southwestern history of the region. Spanish architecture refers to architecture common to what is now modern-day Spain and completed by Spanish designers worldwide. Due to its historical and geographical diversity, Spanish architecture has drawn from a host of influences, including Roman, Italian and Greek.

In 1923, when the Board of Directors was still hammering out the details on how the new school would look, they met to outline a symbolic identity for what was then known as Texas Technological College, according to documents from the Southwest Collection. The original campus buildings were part of a campus plan designed by William Ward Watkin, founder of the School of Architecture at Rice University. 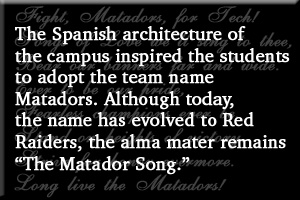 The most widely recognized building on campus is the Administration Building. The highly detailed structure was modeled after La Universidad de Alcalá, in Alcalá de Henares, Madrid, Spain. The similarities between the two buildings are seen in the ornate limestone columns and pilasters, archways, cornice caps, window design, courtyard and dominant center bay, as well as the use of brilliantly colored, mission clay tiles coating the roofs.

The same architecture makes up the historic character zone, one of seven predominant architectural zones throughout campus. The buildings located in the historic zone include the Administration, Chemistry, Science (Physics), Mathematics and Industrial Engineering Buildings.

Buildings in the Engineering Key make up part of the historic character zone.

The first buildings were designed not only to be functional classrooms and offices, but to inspire those who saw them and to become an extension of the educational process. In that vein, the decorations and symbols placed on the buildings represented democracy, morality and the achievements of the past.

For example, the Spanish arch leading the way into the Electrical Engineering Building is patterned after the traditional decorative Spanish cresting motif, complete with cupids and finials. The cupids hold shields with carvings symbolizing architectural, electrical, civil and mechanical engineering.

But the most detailed of all the original buildings is the Industrial Engineering Building. Also playing on the traditional arch theme, the intricately designed gateway resembles the historic San Jose Mission in San Antonio.

Although many more renovations and new buildings have been molded into shape, the Spanish style and beauty were never bulldozed away. Each new building and addition continues the trend of mixing education and inspiration with quality and functionality.