Big Shoes to Fill: Student is President for a Day

Chuck Zavala switches roles with President Bailey for a day. 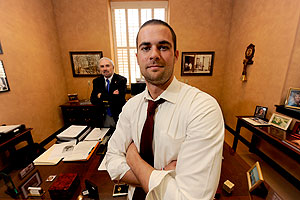 Chuck Zavala, a junior history and Spanish major from South Padre Island, purchased a raffle ticket for the chance to spend the day as the president.

Wake up in the mornin’ feeling like… President Bailey?

Change up the lyrics from the hit pop song by Ke$ha, and that is exactly how Chuck Zavala, a junior history and Spanish major from South Padre Island, started out his week on the Monday after Spring Break.

“I woke up and couldn’t just throw on my normal shorts and sweatshirt,” Zavala said. “I had to wear business attire and it kind of hit me, 'I’m meeting the president of the university today.'”

A few weeks before, Zavala purchased a raffle ticket for the chance to spend the day as the president of Texas Tech. The “President for a Day” program is a fundraiser for Mortar Board, a national honor society that recognizes college seniors for outstanding achievement in scholarship, leadership and service.

“My girlfriend was actually selling tickets,” Zavala said, “and at the last minute she hadn’t sold very many and asked me to buy some, so I bought one. What are the odds?”

Zavala's itinerary was packed from 9 a.m. until 4 p.m. with meetings, a luncheon and guided tours. This was different, he said, from his normal Monday which starts at 10 a.m. and ends at noon, even though Zavala believes he was spared from many of Bailey’s more grueling duties.

“I know President Bailey has a huge responsibility,” Zavala said. “My day as president was nothing compared to the normal day he deals with.”

After a morning of meetings with the president’s staff and a tour of his office, Zavala headed to lunch at the Lubbock Club, joined by the vice presidents and others who report to the president. During lunch, Zavala got to know the group better and discussed the paths that brought them to Texas Tech.

“Lunch was my favorite part of the day because I got to meet with a lot of the heads of the school, the people who make the wheels turn,” he said. “They all have professional titles before their names but they were all very nice and funny, a good group to be with.”

The afternoon was spent touring the president’s suites in both Jones AT&T Stadium and the United Spirit Arena. Zavala said this was a part of the day where he got to experience some of the perks of being president.

Zavala ended his one-day "term" by meeting the man whose shoes he had walked in all day, the real president of Texas Tech, Guy Bailey.

“I had never met him before so I was kind of nervous, but the moment I met him it was obvious he was very nice and very open, not as intimidating as I thought,” Zavala said. “I really did enjoy the experience. I learned there are a lot of components to making the university run and I think I’ll leave it up to Dr. Bailey for now… I might change my mind though.”