Vampires Do Not Make Good Valentines

Stealing kisses from a vampire could cost more than a card or box of chocolates. 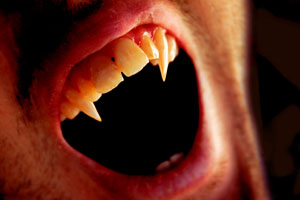 Vampires are no longer viewed as repulsive in popular literature.

Mysterious, attractive, powerful, immortal. Sounds like the perfect valentine, right? Maybe not. Stealing kisses from a vampire could cost more than a card or box of chocolates – it could cost your blood – or your soul.

“’Carmilla,’ a novella published in 1872 contains the first significant female vampire in English literature, it even has a lesbian subtext,” Collopy said. “Carmilla is remarkably beautiful and appealing, but ultimately repulsive because of her vampirism. However, I think the first English-language film version of Dracula, released in 1931 and starring Bela Lugosi, was what really started the vampire fascination in the United States.”

Vampires are no longer viewed as repulsive, she said. This is evident in the “Twilight Saga.” The Cullen family is just one example of the sympathetic vampire in contemporary film and literature. Collopy said she thinks it is easy for teenage girls to both identify with Bella and want to be like her.

“In many respects Bella seems very ordinary,” Collopy said, “but when she shows up at a new school, everyone is interested in her, especially the vampire Edward. Edward is exceptionally attractive, wealthy, interesting to Bella, and devoted to her.”

Collopy said she does not think most vampires would make a good valentine, especially Slavic vampires – an unclean spirit possessing a decomposing body.

“I wouldn’t want a Slavic folkloric vampire as a valentine,” Collopy said. “They’re entirely too zombie-like. Dracula wouldn’t make a very good valentine. However, Edward would probably give you a red-convertible Porsche or a Faberge egg.”

Happy Valentine's Day from the Office of Communications & Marketing!

Warning Labels for Potential Valentines?
Research suggests that young adults display emotional behaviors that could indicate how well they will settle into married life.