TTUISD Graduate Skates His Way to the Olympics

Speed skater Jordan Malone competes for gold with the men's relay team on Feb. 26 in Vancouver. 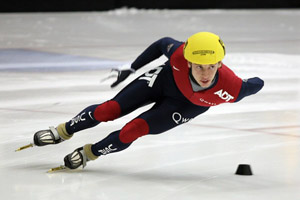 TTUISD graduate Jordan Malone makes his Olympic speed skating debut this year in Vancouver. Photo courtesy of Jerry Search.
When Olympic speed skater Jordan Malone competes as part of the men’s 5,000-meter relay team on Feb. 26, it may be the last time he participates with skating legend Apolo Ohno, who may end his career with this competition. Though Malone did not compete in the semifinals on Feb. 17, the former Texas Tech University Independent School District (TTUISD) student still has a chance to win a gold medal. Malone, a native of Denton, makes his Olympic debut in Vancouver this year, beginning with short track after a hugely successful inline skating career. Named the Fastest Man in the World for inline speed skating in 2003, he has since made the switch to ice speed skating, competing in the past five world championships and earning top-10 rankings overall in world competitions. Malone said watching former inline skater Ohno compete as an ice skater in the 2002 Winter Olympics inspired the change, though he decided to achieve all he could with inline before making the switch. His life has taken him around the world to more than 154 different cities in 18 different countries on four different continents. Constant competition made attending a typical high school out of the question. To receive his high school degree, Malone said he chose to attend TTUISD after hearing about it from some friends. The distance-education program within the University College of Texas Tech University offered Malone the flexibility and convenience he needed as a full-time athlete and student. He graduated in November 2008. Established in 1993, TTUISD is the only accredited distance-learning, kindergarten-through-12th grade diploma program in Texas. It offers a rigorous high school curriculum through a combination of print-based and electronic courses. During 2008-2009, TTUISD reached a record enrollment number of 1,802 full-time students. Alumni include former Miss Texas Morgan Matlock; Sarah LeMaire, who plays Sarah Moody on “The Wannabes Starring Savvy;” “Friday Night Lights” star Jesse Plemons; and Hunter Parrish, seen on the Showtime series “Weeds” and featured in the Hilary Swank movie “Freedom Writers.” Though he has put his education on hold, Malone plans to go to college and get an engineering degree. When he is not practicing, Malone runs his own business out of his garage under the name Full Composite Racing (FCR), where he manufactures carbon fiber protective racing equipment for 80 percent of the Short Track National Team. “It is a fun hobby to have on the side,” he said. “It’s a self-taught, independent venture and I’m working with some pretty impressive aerospace materials. This is part of my road to becoming an engineer after skating.” Stephanie Schettek and Anna Woodlock contributed to this report.