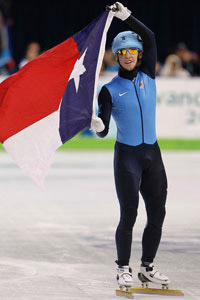 Denton native Jordan Malone skated for Team USA – the only team to medal all 10 Olympians for short track. Connect with him on facebook.

Olympic short-track speed skater and Texas Tech University Independent School District alum Jordan Malone gave his all during his last chance to medal, and managed to bring home some bronze hardware from his debut at the 2010 Winter Olympics in Vancouver.

Getting disqualified during the preliminary heat from the 1,500-meter and then falling while in second place during the 500-meter race made for frustrating results during his individual competitions. However, Malone made good on his last chance to medal during Friday's 5,000-meter relay at Pacific Coliseum, making seven exchanges during the grueling 45 laps and helping his team place third behind Canada and South Korea.

"I wasn't expecting, but I was hoping," he said, describing the moment when Apolo Ohno crossed the finish line, clinching bronze for the United States. "As far as when it happened, I was pretty ecstatic. We were going for gold the whole time. At first, it's like, 'Oh, man we almost had it.' But then you sit back and say, ‘We've got bronze. We've got hardware.' People were like, 'Are you disappointed?' Well, I'm disappointed that we didn't win, because that's what our hopes were. We weren't going into it just to medal. But at the same time, I will never, ever, ever be disappointed with an Olympic medal, regardless of the color."

The win gave Malone's teammate Ohno his eighth Olympic medal, making him the most decorated Winter Olympian of all time. Because Simon Cho skated in Malone's place during the semi-finals last week, Team USA was the only team to medal all 10 Olympians for short track, Malone said.

A native of Denton, Malone made his Olympic debut in Vancouver this year following a hugely successful inline skating career, earning the title of the Fastest Man in the World for inline speed skating in 2003. He has since made the switch to ice speed skating, competing in the past five world championships and earning top-10 rankings overall in world competitions.

Malone said watching former inline skater Ohno compete as an ice skater in the 2002 Winter Olympics inspired the change, though he decided to achieve all he could with inline before making the switch.

As a professional athlete, attending a typical high school was out of the question. Competing around the world meant long lapses in class time with traditional schooling.

"I had to go where the races were," he said. "One time, I missed the first six weeks of school. That was way too hard for me. I think my senior year, I went back to Denton High School and I missed 80 out of 180 days. I still got 'A's, but it's when it's not set up to do the work away from school, it makes it that much harder."

To receive his high school degree, Malone said he chose TTUISD after hearing about it from some friends. The distance-education program within the University College offered Malone the flexibility and convenience he needed as a full-time athlete and student. He graduated in November 2008.

Established in 1993, TTUISD is the only accredited distance-learning, kindergarten-through-12th grade diploma program in Texas. It offers a rigorous high school curriculum through a combination of print-based and electronic courses. During 2008-2009, TTUISD reached a record enrollment number of 1,802 full-time students.

Down, but Not Out

Still bleary-eyed from celebrating all night and interviewing all morning, Malone said he'll spend the afternoon with his family and buy a few souvenirs before Sunday's Closing Ceremonies. But despite his medal, Malone said he's far from done with his Olympic career. He can't help from wondering how he would have done without a torn ACL.

"The next 2 years are kinda going to be slow," he said. "I'll be resting and recovering from the four-year (training) onslaught. But a bronze medal isn't a gold medal. It isn't conquering. I have unfinished business. It's nice to come back with some hardware, but to say I'm fully satisfied would be incorrect. I'm very hungry. I skated really well, but potentially I'm not what I could be. I'd like to go into next Olympics at the top of my game, 100 percent, and see what happens."