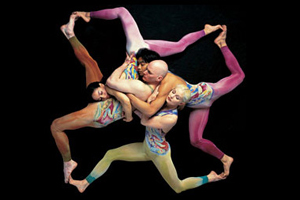 Pilobolus will conduct a master class for theatre and dance students. Follow a live feed of the master class 10 a.m. March 3 @TTUevents on Twitter. Photo courtesy of John Kane.

Pilobolus, named for a sun-loving fungus that grows in barnyards and pastures, germinated in the fertile soil of a Dartmouth College dance class in 1971. What emerged was a collaborative choreographic process and a unique weight-sharing approach to partnering that gave the young company a non-traditional but powerful new set of skills with which to make dances. Today, Pilobolus is a new genre of dance in American dance theatre and has evolved into an American arts organization of the 21st century.

The company performs for stage and television audiences all over the world and have made appearances on CBS’s "60 Minutes," the Academy Awards, the "Oprah Winfrey Show" and the "Late Show with Conan O'Brien." Learn more and connect with the Pilobolus Dance Theatre on Facebook and Twitter.

"Pilobolus will dazzle Lubbock audiences," said Jo Moore, Presidential Lecture & Performance Series administrator. "Since its early years, Pilobolus has redefined dance and movement. To quote from a review from the Buffalo News, 'To watch Pilobolus in action is to witness the kind of athleticism and choreography that broke ground for Cirque du Soleil.' The dancers become an organic form unto themselves. Pilobolus' grace, strength and humor shine through in their work."

The event will begin at 8 p.m. March 2 in the Allen Theatre in the Student Union Building. Also, Pilobolus members will conduct a master class at 10 a.m. March 3 at the Student Recreation Center in room 114, providing a learning opportunity to a select group of theatre and dance students.

Tickets for Pilobolus Dance Theatre are on sale for $12 at the Student Union ticket booth. Students receive one free ticket with a valid student ID.

Other events in the series include the Santa Fe Opera Spring Tour at 2 p.m. April 18 at the Lubbock Memorial Civic Center Theatre. The tour is a project of the Santa Fe Opera's Education and Community Programs Department, which allows a group of about 40 young opera performers to expose audiences to their talent and opera. Admission is free.

Click here for more information on the Presidential Lecture & Performance Series and to view video of the Pilobolus Dance Theatre.