The team received first place at the Southwestern Livestock Show with a score of more than 4,000 points. 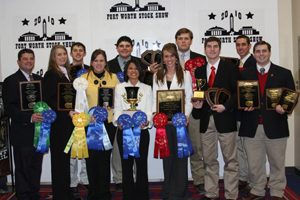 The Texas Tech meat judging team received first place on Feb. 7 at the Southwestern Livestock Show, more commonly known as the Fort Worth Stock Show and Rodeo. This is the second win for them this year.

“This was another exciting win for the 2010 team,” Miller said. “I could not be more proud of these nine students and the progress they have made so far.”

See the meat judging team and connect with Texas Tech on Flickr.

The top-ten individuals are as follows:

The top-ten alternatives are as follows: