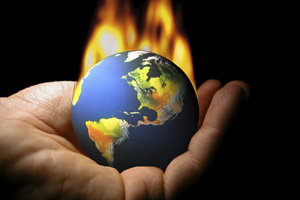 According to Hayhoe, more than 150 years of studies indicate a steady warming of the world's climate.

E-mails and computer code stolen from the University of East Anglia’s Climatic Research Unit in the U.K. have caused a flurry of questions about the validity of climate change on a global scale.

However, one Texas Tech expert said it’s still clear from the immense body of independent research conducted around the world that global climate change is occurring and human activity is responsible for much of the change.

Recently interviewed by Scientific American, Katharine Hayhoe, a research associate professor in the Department of Geosciences, said that the scientific consensus hasn’t changed, and that world leaders at the recent UN COP15 meeting in Copenhagen, Denmark, used this evidence when trying to decide how each country should contribute solutions to slow global climate change.

“In terms of the scientists whose emails were stolen, I can't defend their actions or their words, because I don’t know them or work with them,” she said. “At the same time, this is no call for us to throw the baby out with the bathwater. A few emails written by just a handful of the thousands of scientists who study climate change does not alter the fact that data collected from all over the world for more than 150 years shows a consistent warming.”

Although nations participating in COP15 did commit to voluntary greenhouse gas reductions, Hayhoe said these reductions would allow global temperature to increase by at least 6 degrees Fahrenheit.

Most studies, which explore the implications of alternative future pathways on the U.S. economy, energy demand, water supply, public health, and the natural environment, indicate that a 3.5 degree increase in overall climate limits the risks of potentially dangerous impacts to humans and the environment.

If the world continues on the current pathway, it will soon be too late to even attempt to limit global temperature rise to below 3.5 degrees, Hayhoe said.

“Not since the 1500s, when scientists and the church were debating whether the sun revolved around the earth or the earth around the sun, have we seen such a widespread and deliberate attempt to discredit scientists themselves,” she said. “We need to take a step back and look at the big picture. We have to weigh those few emails from a handful of scientists against an overwhelming, worldwide consensus from thousands of researchers. The truth is that climate change is a very real and a very serious problem--one that demands our immediate attention if your goal, like mine, is to leave a better world for our children than the one we inherited from our parents.”

Hayhoe is a National Academy of Sciences committee member on greenhouse gas stabilization targets. She has authored a number of studies that examine how climate change will affect the planet, including the U.S. Global Change Research Program’s 2009 report on climate impacts in the United States. Her work has been featured in more than 200 newspapers and media outlets around the world, including USA Today, the BBC, Discovery Channel, National Geographic and Sports Illustrated.

Hayhoe also contributed to the Nobel Prize-winning United Nations Intergovernmental Panel on Climate Change in 2007. In 2009, she and her husband, Andrew Farley, published “A Climate for Change: Global Warming Facts for Faith-Based Decisions.”