Horton and Testerman's standings have earned them an invitation to the 2010 national tournament. 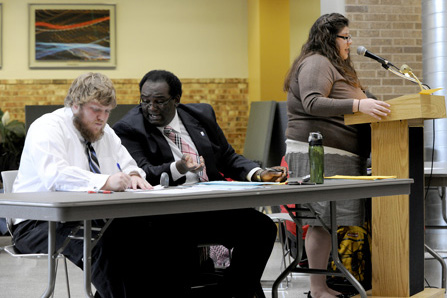 A pair from Texas Tech’s debate team is ranked second in the nation, according to recent standings published by the National Parliamentary Tournament of Excellence.

Also, Texas Tech is one of only two schools to have three debate teams ranked in the top 40.

Brian Horton, a senior political science, French and geography major from San Angelo, and Adam Testerman, a junior mass communications major from Springfield, Mo., are Texas Tech’s top debating pair whose national position has earned them an invitation to the 2010 National Parliamentary Tournament of Excellence, to be held March 27-29 at Azusa Pacific University.

So far, Horton and Testerman have won 61 debates this year and lost nine.

“Brian and Adam have earned their ranking through outstanding results at eight invitational debate tournaments throughout the season,” said Joe Gantt, debate team coach. “They have won two tournaments and have finished among the top three teams at four other tournaments, including a semifinals appearance at a recent tournament held on the Texas Tech campus.”

The Texas Tech debate team will travel to two tournaments in February before beginning preparations for nationals in March. The tournaments include a Feb. 12-14 competition at Drury University, and a tournament to be held Feb. 19-21 at Whitman College.