Texas Tech cheerleaders were one of two teams invited to participate in the Texas vs. the Nation all-star game. 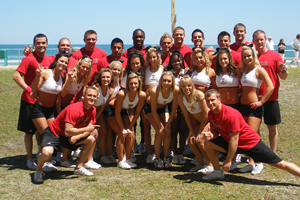 Texas Tech cheered the state of Texas to a 36-17 victory over the Nation on Feb. 6 in El Paso.

The cheerleaders on the sidelines were wearing Double Ts when the best college football players from the Lone Star State laid a drubbing on rivals from across the U.S. in the Texas vs. the Nation all-star game.

Game organizers invited Texas Tech’s Cheerleading Squad to attend the annual event in El Paso that pits players with Texas roots against those hailing from the nation’s lesser 49 states.

“The organizers wanted the best collegiate cheer team in the state to represent the Texas team and our name came up,” said cheerleading coach Joshua Anderson. “This wasn’t something we applied for. They invited us because they felt we were the best cheerleading squad in Texas.”

Texas Tech has established itself as a national presence in the cheerleading arena, claiming third place at the 2009 National Dance Association Collegiate Cheer and Dance Competition in Daytona Beach, Fla.

In August, the squad also earned rare paid bids to the 2010 competition.

Anderson said the Texas vs. the Nation game served to boost recruiting as squad members worked with cheerleaders and coaches from high schools across the state on routines performed during the game.