Amber Lubbers was selected because of her hard work, achievements and honors. 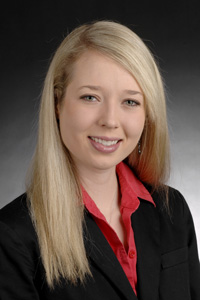 After summer internships with ConocoPhillips in Borger and EOG Resources in Midland, Lubbers plans to enter the energy industry or the defense industry.

Lubbers has earned 14 scholarships from the university, the Whitacre College of Engineering, and Midland College over the course of her undergraduate career.

She is the recipient of:

Lubbers was also named a ConocoPhillips Spirit Scholar and was among the Who’s Who Among Students in American Universities for 2009.

Mindful of being involved in her community, Lubbers said she has worked with Big Brothers Big Sisters of Lubbock, Habitat for Humanity and the Lubbock State School. She has helped in relief efforts for Hurricane Katrina and mission trips to Costa Rica, British Columbia and Mexico.

This award, provided by members of the college's Dean’s Council, is named in memory of James A. McAuley, an active member of the Dean’s Council and a Texas Tech Distinguished Engineer.