Florida was recently named one of Esquire Magazine’s Best and Brightest. 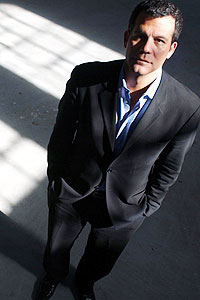 Florida received his doctorate from Columbia University and held professorships at Carnegie Mellon University, Harvard and MIT. Learn more about him on Twitter and Facebook.

His speech will focus on economic prosperity through support of arts and culture, said President Guy Bailey. The event will begin at 7 p.m. Feb. 5 at the Student Union Building Allen Theatre.

For a live feed from the question and answer session and the lecture follow @TTUevents on Twitter.

"Because of the breadth of his knowledge and research, Dr. Florida brings a global view to why people live where they do, what is important to them, how a city retains its citizens and how a city prospers," Bailey said. "His talk on campus will focus on economic prosperity through support of arts and culture by the creative class, whether students, artists, scientists or researchers."

Some of Florida’s achievements include writing numerous articles for The New York Times, The Wall Street Journal, The Boston Globe, Harvard Business Review and Financial Times. His new book, "Who's Your City?" has been called a national bestseller, an international bestseller and Amazon Book of the Month.

Recently named one of the "best and brightest" by Esquire Magazine, Florida is a national and international best-selling author. His book "The Rise of the Creative Class," has received awards including Washington Monthly's Political Book Award and was cited as a major breakthrough idea by Harvard Business Review.

Florida received his doctorate from Columbia University and held professorships at Carnegie Mellon University, Harvard and Massachusetts Institute of Technology.

Other spring events in the series include Pilobolus Dance Theatre, an exploration of creative collaboration in the form of dance, 8 p.m. March 2 at the Allen Theatre.

Tickets for Richard Florida and Pilobolus Dance Theatre are on sale for $12 at Select-A-Seat locations or online at http://www.ticketsage.com/_lubbock. Texas Tech students are allowed one free ticket from the Student Union ticket booth with a valid student ID. Admission for Santa Fe Opera Spring Tour is free. For more information, visit www.presidentialseries.ttu.edu

For a live feed from the question and answer session and the lecture follow @TTUevents on Twitter.