The piano recital will highlight the connections between Beethoven and two composers of the early Romantic period. 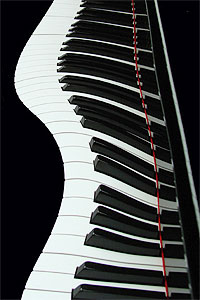 The recital will highlight how Beethoven and his contemporaries experimented freely with many aspects of sonata form, often borrowing elements from a freely improvisational form."

To celebrate the 200th birthdays of composers Robert Schumann and Frederic Chopin, a professor at Texas Tech’s School of Music will perform “Beethoven and the Birth of Romanticism.”

The free event begins at 8 p.m. Saturday, Jan. 30 in Hemmle Recital Hall. The piano recital will highlight the connections between Beethoven and these two composers of the early Romantic period. Lora Deahl, professor of piano and keyboard literature, will play.

“Beethoven’s ‘Opus 126 Bagatelles’ were completed in 1824, three years before his death,” Deahl said. “In this work, Beethoven established many of the foundational principles that allow a series of short pieces to become a coherent cycle. Opus 126 prefigures the longer, more elaborate character piece cycles of Robert Schumann – his immediate successor in the development of this genre. Schumann’s famous cycle, ‘Kinderszenen,’ is an adult’s nostalgic reminiscence about the idyllic nature of childhood. It ends with the poet’s bittersweet acceptance of the irrecoverable loss of his youth.”

In his middle- and late-period piano sonatas, Beethoven and his contemporaries experimented freely with many aspects of sonata form, often borrowing elements from a freely improvisational form, the fantasy, she said.

“The ‘Waldstein’ is a tightly organized work by Beethoven,” Deahl said. “But still, we see the unusual key schemes, unexpected fermatas and extreme contrasts of thematic material that are typical of the fantasy. The most unexpected structural element in “Opus 53” is a dotted-rhythm funeral march that acts as an introduction to the last movement.  In the Romantic period, many composers were importing elements of sonata form into the fantasy, making the latter into a more epic, coherent form.”

The Chopin “Fantasy” opens with a dotted-rhythm introduction, she said. The rest of the work contains the many improvisational passages that one would expect of a fantasy, but the overall structure, including a modified recapitulation, owes much to conventional sonata design.

She was named U.S. Presidential Scholar from her native state of Hawaii under President Lyndon Johnson and was a National Merit Scholarship recipient at the Oberlin Conservatory of Music. She received graduate degrees with highest honors from Indiana University and the University of Texas at Austin.