The Seventh Annual Big 12 Trombone Conference, an educational and entertainment opportunity open to all, features an internationally renowned jazz artist, as well as two prominent classical musicians from the nation's best military bands.

Marshall Gilkes, as well as two well-known classical musicians, tenor trombonist Sgt. David Rosengaft of the US Air Force Concert Band, Washington, D.C., and bass trombonist David Brady of the “President’s Own” US Marine Band, also based in Washington, D.C., will be at the conference. 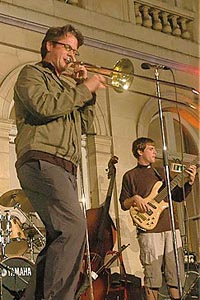 Trombonist Marshall Gilkes is forging new ground and receiving high acclaim from critics in the United States, South America, Europe and Asia. Born in Camp Springs, Md., Gilkes spent his childhood growing up in many different parts of the country traveling with his father, a musician in the Air Force. He currently calls Brooklyn, N.Y. home.

Gilkes is currently a member of the internationally acclaimed Edmar Castañeda Trio as well as the Maria Schneider Orchestra, and the David Berger Jazz Orchestra. In addition, he has performed with Billy Cobham, Richard Bona, Duke Ellington and the Village Vanguard Orchestra.

In the Latin community, he has performed with Machito, Giovanni Hidalgo, Chico O’Farrell, Tito Nieves and Big 3 Palladium Orchestra. During 2001 and 2002 Gilkes played for the National and Japanese tours of the Broadway show “Swing”, and in 2003 was a finalist in the Thelonious Monk International Jazz Competition.

Rosengaft attended Southern Methodist University in Dallas. While at SMU, he performed with the Dallas Symphony and at The International Festival-Institute at Round Top. He also was featured at the 2008 Eastern Trombone Workshop performing with the SMU Trombone Quartet.

While in the local area, Rosengaft has performed with the Washington Opera and the McLean Orchestra. His principal teachers include John Kitzman and Ron Baedke. 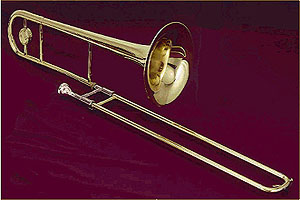 Several excellent concerts and clinics will take place at the conference, featuring some of the country’s most prominent trombone professors.

Several concerts and clinics will be taking place, featuring some of the country’s most prominent trombone professors. Also, exhibited at the conference are the finalists of the Yamaha-Xeno Tenor Trombone Solo Competition, the Edwards Bass Trombone Competition and the winning compositions for the Second Annual TTU Trombone Choir Composition Competition.

The Seventh Annual Big 12 Trombone Conference will take place beginning on Jan. 16 with registration at 8 a.m. and the first conference event will begin at 9 a.m. The event runs through Jan. 17, culminating with the feature artists concert at 3 p.m. All events will take place at the Texas Tech School of Music, located at 18th and Boston.