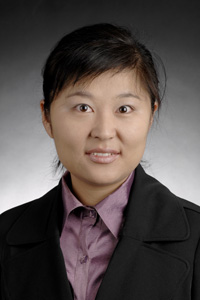 A Texas Tech economist has found that a fairly simple networking formula could increase the odds that policymakers will fund dynamic and productive research partnerships.

Using information such as how well researchers work with their peers, even nontechnical experts can get an approximation of how many published articles, papers and collaborators a research project is likely to produce, said Miaomiao Wang, a research assistant in the Department of Agricultural and Applied Economics.

Wang’s theory works from the small-world networking model – the concept that everyone is just a few friends away from knowing everyone in the world.

Imagine a game of Six Degrees of Kevin Bacon that encompasses research institutions across the globe. And instead of linking movie stars, players instead plug researchers into projects.

Wang wanted to see if she could increase the likelihood that research collaborations would be productive and successful if they were funded based on how effectively the scientists could tap into their vast networks of peers to share information.

“It’s like spreading a disease,” Wang said. “Instead of trying to prevent the spread of the disease, we’re trying to spread the infection as efficiently as possible.”

Wang surveyed the most highly published scientists in a specific field of bioenergy research and combed through ten years of published articles, extracting information on coauthors, funding levels and the number of collaborators recruited into a project.

She then mapped out the relationships between coauthors using a weighted formula that considered how closely associated the researchers were before the project began and how many additional researchers they managed to recruit.

She found that adhering to a policy that provides funding to the most efficient collaborators could increase publication rates by 11 percent and faculty recruitment by 25 percent with only a 3 percent difference in funding.