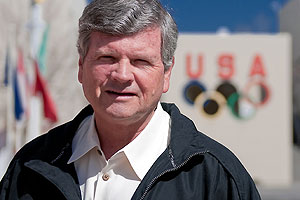 Mass Comm alum Bob Condron is preparing for the 2010 Winter Olympics in Vancouver, his 14th Olympiad.

When Michael Phelps electrified the world with his eight gold medals and seven world records at the 2008 Summer Olympics, it was a Red Raider who helped guide him through the media gauntlet.

“There were 28,000 members of the media in Beijing, all wanting to talk to Michael,” said Bob Condron, a 1968 Mass Communications graduate. “There were news conferences, not to mention contractual commitments to some media outlets to be met as soon as he got out of the pool. Just trying to get him down the hallway was a job. He couldn’t talk to everyone. On top of that, his coaches wanted him back in the pool within 14 minutes getting the lactic acid out of his body to be ready for the next race.”

With the 2010 Winter Olympics starting Feb. 12 in Vancouver, Canada, Condron is gearing up yet one more time to run the massive media machine of the U.S. Olympic Committee (USOC). This will be his 14th Olympiad and he’s been preparing since 2007 – a year before Beijing. Read his full bio.

It’s a pretty heady job for a guy who in college had his eye on playing sports – not writing about them. Condron came to Texas Tech after his freshman year to play on the golf team after West Texas State University dropped its golf program. The Texas Tech golf coach said he’d have to sit out for a year because he was a transfer.

“That told me I needed to get a job and earn some money,” Condron said. “Come to find out, the coach was wrong. If you transfer because a sport was dropped, you can play right away at the new school. But his error set me on a path that changed my life.” 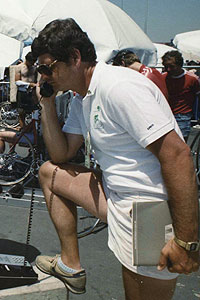 Condron handles media calls during the U.S. Olympic Trials for Cycling at the Velodrome at Dominguez Hills, Calif. before the 1984 Summer Games.

The Olympics have provided Condron with amazing stories. The Olympic Park bombing in Atlanta anchors the bad end of the spectrum. “We immediately got on the phones to account for every member of the delegation. Some were out at dinner and we couldn’t find them right away,” he said. “That was not a good moment.”

Moments that had nothing to do with gold medals top his list of good memories: Watching an injured Jackie Joyner-Kersee in the last race of her career trying for one more medal. “It was raining and she was hurt, but somehow she gutted it through and finished third. She already had two golds in the past two Olympics, but the bronze medal may have been the best of all as she laughed and cried and dove into the arms of her husband and coach Bobby Kersee.”

Then there was the physically disabled child on a bus in Seoul, South Korea. His mother held him close as the other children on the bus pointed and talked. Condron gave the child his U.S. Olympic Team pin. “The mood on the bus changed. The Koreans were mad for pins, especially anything with USA on it. The child suddenly became a hero to the people on the bus and they crowded around him. Did it change his or his mother’s life? Maybe, maybe not. But it was a good moment.”

Get Condron reminiscing and he’ll tell you stories of tennis greats Serena and Venus Williams trading pins with fellow athletes “virtually every waking moment.” Of watching Kerry Strugg land her vault on a bad ankle to secure a gold medal for the U.S. women’s gymnastics team. And maybe the best of all, watching Mary Lou Retton capture America’s heart with her performance in Los Angeles.

And then there is Apolo Ohno who lived at the Olympic Training Center for four years preparing for the 2006 games in Torino, Italy where he won a gold medal in speed skating. “He came back to Colorado and went to every person that had ever served him a meal or cared for him. He hugged them and put his medal round their necks. He said if all those people hadn’t cared about him and smiled with him every day, he would have left the sport.” 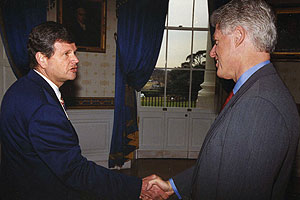 Bob Condron shakes hands with Bill Clinton during a visit to the White House after the Atlanta Games in 1996.

Not Stopping Made a Difference

Condron admits, with a sheepish laugh, that it was not the golf coach’s wrong answer, but his not making an urgent bathroom stop that may have truly been the moment that altered his life. Billy Ross, then head of the advertising program in the College of Business Administration, announced in class there was an opening in Texas Tech’s sports information office and anyone interested should get over there soon as possible.

“Well, I had to go the bathroom, but I was afraid if I stopped, someone might beat me to the job. So I made like Jesse Owens, bypassing the much-needed bathroom,” Condron said. “My competition stopped for a brief time, got there a minute later and I had been hired as a student assistant in the sports information office. That’s when I went to the bathroom.”

Condron found a lot more at Texas Tech than a love of sports media. He met and married his late wife Jane who was also a Texas Tech student, and had two sons, Mark and Chris. Jane died in 2008, and Condron calls their marriage a 40-year love affair.

He also learned time-management skills. “I was taking 18 hours a semester, working full-time in the sports information office and four nights a week at the Avalanche-Journal, and I had a fantastic wife and young child. I had to make it all happen,” he said.

He also found professors who nurtured him. “I remember Ralph Sellmeyer teaching me photography and the magic of watching the images form in the chemicals. It was like your life came into focus in that red-dimmed light. And Dr. Ross was a great teacher. He taught me about advertising and pointed me to my future – minus the bathroom.”

Condron’s journey to the USOC also took him to the sports information office at SMU during the exciting Pony Express days. During those days at SMU, he volunteered at a couple Olympic games then was offered a job and moved in January 1984 to Colorado Springs.

Condron not only serves as head of media services for the USOC, he’s also a member of the International Olympic Press Commission, a group that provides advice and counsel to Olympic Organizing Committees in all areas concerning media. Since joining the USOC, Condron has worked on six Pan American Games, 11 U.S. Olympic Festivals and has been involved with numerous world championships, world cups, and numerous national championships, Olympic Trials, World University Games and Paralympic Games. 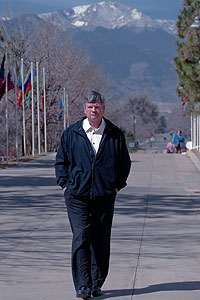 Condron's team has long been preparing from their home base in Colorado Springs for Vancouver 2010, where they will monitor every sport and every single event.

Now it’s time for the next memories. He’s made a hand full of trips to Vancouver, scoping out the location and figuring out how to set up his media operation. A typical day at the Olympics can begin about 8 a.m. “That depends on what time zone we’re in. We try to jive with U.S. time for media deadlines. At least Vancouver is in an American time zone.”

His staff runs the press center where 300-400 members of the media come each day. The breaking-news bureau monitors what’s happening in every sport and transmits how American athletes are doing to the media, somewhat like a wire service. His staff provides stories and quotes from every single event. His staff also decides who gets in to cover what sports.

Just because you have media credentials doesn’t mean you get in to some events. “We can’t accommodate everyone in the major events, such as figure skating. We try to figure out who should be there, is there someone from the athlete’s home town? That may mean that the Tahoka newspaper gets in and the New York Times does not.”

By 10 p.m. each night, the events have wrapped up and his staff shifts into what he calls “managing victory” mode. “We go over what to expect from the media with athletes who have won gold medals. By midnight we’re producing a newsletter for the next day that gives a preview of the sports and who’s competing. By then it’s around 2 a.m. and it will all start again in about six hours.

“And that doesn’t count time to get up and dressed, eat breakfast and get to the venue that sometimes has been an hour away.”