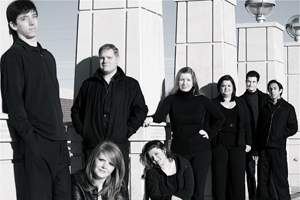 “It’s about one moment. It’s about hitting the wall and having to make a choice, or take a stand, or turn around and go back.” Brown said.

Brown, also the composer-lyricist of hits "Parade" and "13," truly jumpstarted his career with "Songs for a New World."

“Brown only dreamt of a cast this sensitive and consummate in their artistry," said Christopher Bailey, stage director. "The music is energetic with strong rhythms and stirring melodies. Each character confronts changes with pure fervor and reverent audacity.”

The show also features a dynamic band led by Deborah Gelber, music director, and features two keyboards, a percussionist and a drummer.

The Winter Dinner Theatre will feature Jason Robert Brown's "Songs for a New World" Jan. 21 at 7 p.m. and Jan. 24 at 2 p.m.in the Legacy Grand Ballroom, located at 14th Street and Avenue O.

Tickets are available for $25 for the general public and $15 with a valid student ID at Select-a-Seat's Web site or at any Select-a-Seat location.