The team has won 12 of the last 13 national meat judging competitions. 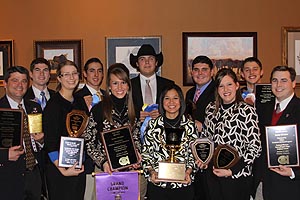 The 2010 team won its first national contest by an impressive 56-point margin.

The team placed first in beef judging, lamb judging and specifications and reasons, resulting in a total score of 4,034 points.

“This is Texas Tech’s 10th win at the National Western,” said Mark Miller, professor and San Antonio Livestock Show Distinguished Chair in Meat Science “This is a talented team that worked hard to win its first contest and carry on the tradition of excellence.”

In addition to White, Woolley and McCullough, team members include:

The team is coached by Miller and meat science graduate student Travis O’Quinn.