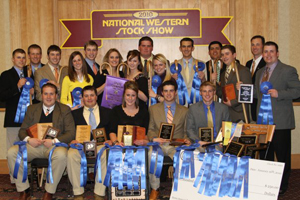 The Livestock Judging Team won in every division with a team score of 4,770 points.

The 2010 Livestock Judging Team won its first contest at the National Western Stock Show in Denver, Colo. The team won the contest by a 46-point margin, posting a total team score of 4,770 points.

"I am extremely proud of the perseverance of these young men and women," said Ryan Rathmann, assistant professor and coach of the team. "I am looking forward to working hard to achieve more wins this season."

In addition to Crosswhite, Cribbs, Scott and Clifton, team members include:

The team is coached by Rathmann and graduate student Bryan Bernhard.

The National Western Stock Show officially began in 1906 and is one of the nation's oldest and largest shows with a prestigious history of livestock judging contests.