Latina of the Year Enrolls in Financial Planning Master’s Program

After talking with current students, Rosa Ybarra was convinced that Texas Tech was the school for her. 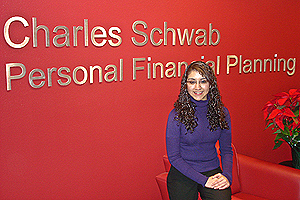 The Association of Latino Professionals in Finance and Accounting named Rosa Ybarra Latina of the Year, a title that comes with a $10,000 scholarship.

Only hours after winging into Lubbock for her first visit to campus, Rosa Ybarra was already hooked.

Not on attending Texas Tech, per se – she’d already decided on that.

No, Ybarra had agreed to join a delegation of students led by Juan Muñoz, vice president for the Division of Institutional Diversity, Equity & Community Engagement, to recruit new Red Raiders from Texas’ Rio Grande Valley.

She’s just that kind of girl.

While a student at the University of Texas-Pan American (UTPA), this first-generation college student was a member of UTPA’s 2008 national championship National Accounting Case Competition team.

She also snagged an internship with the U.S. Treasury Department’sOffice of the Comptroller of the Currency.

In August, the Association of Latino Professionals in Finance and Accounting named her Latina of the Year – a title that comes with a cool $10,000 scholarship from big-four auditor Deloitte.

Of all places, Rosa Ybarra first heard about Texas Tech’s financial planning graduate program while at a conference for the NAGDCA, the association for people with government pension plans and those who provide them.

She met some students from Texas Tech. Started talking to them about coursework, professors, student-to-teacher ratios. Digging, trying to get past any fluff or salesmanship.

In other words, she wanted the truth, unvarnished.

“I started asking questions, trying to get them to say negative things, but they never did. They had great things to say about Texas Tech.”

Now Ybarra is considering taking advantage of the financial planning program’s dual master’s degree offerings with the Rawls College of Business, pursuing something like finance.

“I love the campus,” she said during her visit to Lubbock. “It reminds me of home, and you can tell the professors are very involved with their students. That kind of relationship with faculty not only helps with coursework, but helps you mature, both as a student and a future professional.”

Research Focuses on Helping Parents Adjust to Down Syndrome Diagnosis