Two faculty members selected for their passion and dedication to academics and research. 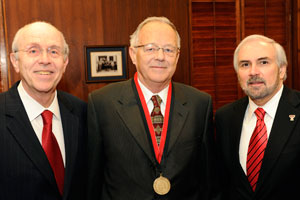 The highest awards given by the Texas Tech University System to faculty members at its member institutions were announced today (Dec. 11) by Chancellor Kent Hance.

The Distinguished Research Award went to Seshadri Ramkumar, associate professor of environmental toxicology at the Institute of Environmental and Human Health.

“These outstanding faculty members exemplify the quality and character of the professors in the Texas Tech University System,” said Hance. “Their passion and dedication to academics and research is unmatched and is apparent through their hard work and numerous achievements. It is my pleasure to once again award these honors to such deserving faculty members.”

Anderson joined Texas Tech in 1986 as chairman of the Department of Mechanical Engineering. He has held the Ray Butler Distinguished Educator in the Whitacre College of Engineering and has served as director of Texas Tech Teaching, Learning and Technology Center. He is known for using the latest technology to develop new and innovative teaching techniques and has received more than $400,000 in National Science Foundation funding related to computer-based instruction and engineering education. Among his many honors, Anderson was named the 2005 State of Texas Piper Professor and in 2003 received the National Award for Excellence in Distance Education from the U.S. Distance Learning Association and the Institute for Telecommunications. He earned his bachelor’s and master’s degrees from Iowa State University and his doctorate from Purdue.

Ramkumar came to Texas Tech in 1999 and joined the Institute of Environmental and Human Health in 2002. His research has lead to the development of Fibertect – a patented nonwoven decontamination wipe. The product was found to outperform other products in tests conducted by the Lawrence Livermore National Laboratory. Ramkumar’s nonwoven fabric work has received international publicity. He has received almost $4 million in external funding for his research. He has received the Technical Textiles Accomplishments Award, an international award presented for nonwovens research, Lubbock's Top Twenty Under 40 Award in 2007, the Scientist of the Year award from the Lubbock Chapter of the Achievement Rewards for College Scientists and the Lubbock Chamber of Commerce’s Innovation in Technology Award. He earned his bachelor’s and master’s degrees from Anna University in India and his doctorate from the University of Leeds, England. He originally designed and developed the INDO-US collaborative conference, "Advances in Textiles, Machinery, Nonwovens and Technical Textiles-ATNT" which is held every year in South India since 2004.