Phi Beta Kappa chapter ranked one of the very best in the country; puts Texas Tech among the nation's elite liberal arts and sciences programs. 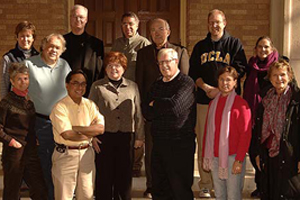 Lambda of Texas, the university's Phi Beta Kappa chapter, was one of only 22 chapters to receive the rating. The chapter now will be considered for the Exemplary Chapter Award that will be presented to three chapters at the 2012 Triennial Council meeting in Palm Beach, Fla.

"This outstanding ranking exemplifies the quality and character of the Phi Beta Kappa chapter at Texas Tech," said President Bailey. "The chapter's passion and dedication to academics is apparent through its hard work and numerous achievements."

The recognition of Texas Tech's chapter is based on such factors as the strong presence of Phi Beta Kappa on campus, its high standards and success in student selection, activities and the hosting of speakers and events, the chapter's Web site and exemplary collaboration with the regional Phi Beta Kappa alumni association.

The chapter's annual report for 2008-2009 was prepared by Mary Jane Hurst, professor of English and founding president of Lambda of Texas.

"In short, the chapter received this recognition because of its commitment to excellence," Hurst said. "This means that not only is Texas Tech University among the top 10 percent of all colleges and universities with respect to its liberal arts and sciences programs, but that its Phi Beta Kappa chapter is one of the very best in the country. I think it is probably unusual for a young chapter, especially at a large school, to receive a top ranking."

"Only the nation's finest colleges and universities ever receive a Phi Beta Kappa chapter," Rosen said. "To be ranked among the top 10 percent of chapters of these elite institutions is a remarkable achievement and reflects the strength of commitment of both the chapter's members and Texas Tech University."

Out of thousands of institutions of higher education in the United States, only 280 have been granted the right to shelter Phi Beta Kappa chapters. That's fewer than 10 percent of U.S. institutions. As one of 22 chapters with a ranking of 1, Lambda of Texas is thus ranked in the top 10 percent of all chapters.

The Texas Tech Chapter of Phi Beta Kappa celebrates academic achievement, intellectual integrity, and scholarly excellence. Early in each spring semester, eligible junior and senior undergraduates are considered for election to the society. An invitation to membership is a high honor to be treasured throughout ones life.