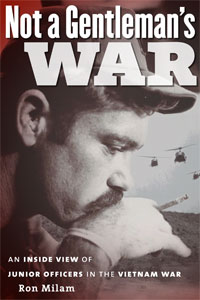 Ron Milam's new book reveals another side to the blame placed on junior officers in the Vietnam War. Buy it online at Amazon.com.

Only a few months after 2nd Lt. William Calley apologized for his role in the My Lai Massacre during the Vietnam War, a Texas Tech University history professor attempts to set the record straight with his new book on the role of junior officers during the conflict.

“Not a Gentleman’s War: An Inside View of Junior Officers in the Vietnam War” focuses on the role of platoon leaders, said author and Vietnam combat veteran Ron Milam. Also, it debunks the conventional wisdom created by the investigation of the massacre and anti-war movement propaganda that junior officers were poorly trained, unmotivated and guilty of atrocious behavior.

A Scholarly Approach to an Emotional Subject

On March 16, 1968, American soldiers attacked the hamlet of My Lai and killed between 400 and 500 non-combatant civilians. Those killed included women, children and babies, and many of the victims were beaten, sexually assaulted and mutilated.

The incident became public about 18 months later. Initially, 26 U.S. soldiers were criminally charged for their roles in the My Lai Massacre. As an investigation progressed, Lt. Calley became a main focus. His education and leadership abilities came into question. Prior to his service, he had dropped out of Palm Beach Junior College for unsatisfactory grades. Investigators found that though he passed his Armed Forces Qualifications tests, his evaluations found him “average.” Also, he had been recommended for a rear echelon position rather than the infantry. Of the 26 officers and soldiers initially charged, only Lt. Calley was convicted.

The massacre became fuel for the anti-war movement that was rapidly gaining momentum in the United States. Protesters generally painted junior officers and soldiers as inept or baby-killers. However, they also believed soldiers should not be held responsible for their actions because society sent them there.

Milam said the My Lai Massacre and the protesters’ use of the event as anti-war propaganda appears to have blurred the facts about the training, capabilities and educational background of junior officers. However, he found military records told a different story.

“I wanted to find out what the Army was saying about leadership during the war,” Milam said. “Well, they were saying very positive things. Some accused the Army of lowering its standards, but they never lowered their academic standards during Vietnam. Calley made it through, and we slipped up on him.”

So what happened after the war to cause such ill-regard for junior officers as a whole? Milam said he noticed a classic case of finger-pointing and buck-passing from higher-ranking officers who were writing books that laid blame on junior officers for problems during combat. This further solidified bad public opinion on junior officers.

“The best answer I could come up with was that Lt. Calley became the poster boy for junior officers,” he said. “Those who were accusing junior officers for the atrocities and problems with the war were field-grade officers such as lieutenant colonels and colonels. These men were not typically as close to the combat action as lieutenants and could not appreciate the contribution junior officers were making to the war effort.

“My goal with the book was to describe what kind of war this was and create that environment. This was a different kind of war for these men than World War II was for their dads. Generally speaking, they did a good job.”

Founded in 1989, the Texas Tech Vietnam Center and Archive houses the largest collection of materials related to the Vietnam conflict outside of the U.S. National Archives.