Nollaig Shona Duit: Happy Christmas from the School of Music

Singers, dancers and storytellers will perform traditional pieces from Ireland, the British Isles, the Appalachians and the Balkans during the Caprock Celtic Christmas Concert. 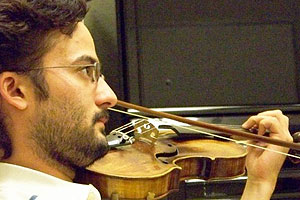 Caprock Celtic Christmas is a showcase of diverse talents of a whole range of musicians, singers and dancers.

As an early Christmas present to the Lubbock community, performers from Texas Tech's School of Music and beyond will bring singing, dancing and storytelling from Ireland, the British Isles, the Appalachians and the Balkans to the plains of West Texas.

Christopher J. Smith, associate professor of musicology and director of the Vernacular Music Center, said the concert has become a holiday tradition for the Lubbock community.

"The idea behind this concert is to present a family-friendly show that makes use of the diverse talents of a whole range of musicians, singers and dancers that we have on the South Plains," Smith said. "It’s a very big, very joyous undertaking. It’s become quite popular in the last eight years. It grew in a very organic way. But this year, we’re seeing a massive expansion, complete with live video stream at KOHM 89.1-FM."

The much-loved "fear an tí" (man of the house") Tom McGovern returns as host.

For the first time, the Caprock Celtic Christmas will be streamed live in both audio and video to listeners across the South Plains on KOHM 89.1-FM or at kohm.org.

Get a peek inside the Celtic Christmas performance:

"Really, the Caprock Celtic Christmas is an event to experience in person," Smith said. "You don’t really know what the event feels like unless you’re part of that big circle. That being said, we thought it would be a great idea to offer the program on the Internet as well as the radio for any of the listeners who might be homebound."