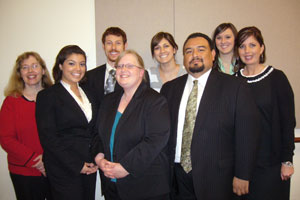 At the American Bar Association (ABA) Regional Legal Negotiations contest in mid-November in Houston, three Texas Tech law teams advanced to the finals, one of which will move on to national competition.

At the Region 10 rounds of the National Moot Court competition hosted later in the month at the Texas Tech School of Law, a team of third-year law students went undefeated, beating all the law schools of Texas and Oklahoma, racking up best oralist and best brief wins, and bringing home the traveling trophy that originated at Texas Tech. 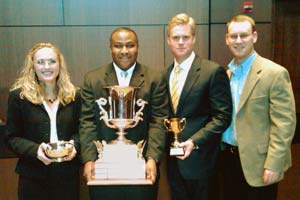 In the final round Martinez and Bazan won the Regional Legal Negotiations Championship, guaranteeing them an invitation to the national championship rounds in February. Law professors Nancy Soonpaa and Wendy Humphrey coach the teams.

On home turf at the moot court contest, third-year law students Chris Taylor of Fort Worth, Courtney Wheeler of Platteville, Wis., and John Beck of Bedford, took first place, earning a berth to the national finals in February in New York and bringing home the Allison Cup. The team also swept the individual awards as well, with Beck’s brief winning the Best Brief award, and Wheeler being named Best Oralist. The team is coached by Rob Sherwin, director of advocacy programs.

The trophy, the Alvin R. Allison Cup, was donated to the regional competition in 1975 by “Friends of the Texas Tech Board of Barristers” in honor of Levelland attorney Al Allison, often referred to as the “Father of the Texas Tech School of Law.”

“At least for the next year, the gorgeous traveling trophy will be housed where it truly belongs,” said Walt Huffman, dean of the Texas Tech School of Law.

“It hasn't been in our trophy case since 1996, when Tiffany Gurkin, Melissa Williams and Mike Yanof brought it home.”