Joe Galloway, an author and journalist, traveled to Lubbock to see the Vietnam Center and Archive and to give a series of lectures for students. 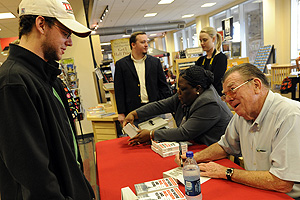 Galloway signed books before giving lectures spanning issues such as the draft and a potential troop buildup in Afghanistan.

Veteran journalist Joe Galloway made his first visit to Texas Tech to tour the holdings of the Vietnam Center and Archive and speak to students through a series of lectures.

Galloway has witnessed and written about wars from the Persian Gulf to Iraq and Afghanistan. But he is perhaps most famous for his combat reporting in Vietnam and experiences on the battlefields of la Drang.

His heroics during the battle – the first major U.S. engagement of the war – made him the only civilian awarded the U.S. Army’s Bronze Star for Valor during the Vietnam War.

Galloway held a book signing at the Student Union Building before giving two lectures on campus spanning issues such as the draft and a potential troop buildup in Afghanistan.

“When I was growing up, there was a draft,” he said. “We fought World War II, Korea, and Vietnam on the draft, and nobody liked it, but it reached out and pulled in Americans from all walks of life, and that wasn’t a bad thing at all.

“We are a nation of 300 million people and fewer than one percent of us wear the uniform and do all of the serving and sacrificing for all of the other 299 million, and they’ve been worked pretty hard these last eight years.”

The U.S. dropped the draft system after the Vietnam War, but Galloway said he believes the United States would benefit from some program that compelled young men and women into national service, creating more appreciation for the liberties they enjoy as Americans.

“Right now, all we’re talking about is how many additional troops we’re going to send to Afghanistan. I keep saying, ‘whoa, time out. First let’s decide if we want to send any more, or whether we should be sending anymore, and we want to be reducing the number we have there.’”