War Correspondent, 'We Were Soldiers' Author to Visit Texas Tech 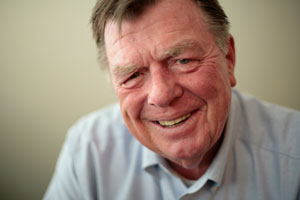 Joe Galloway, a veteran journalist most famous for his combat reporting in Vietnam, will visit Texas Tech University to provide a pair of public lectures on campus Wednesday (Nov. 11).

He will hold a 9:30 a.m. book signing at the Barnes and Noble in the Student Union Building.

He will then give a lecture at 3 p.m. in room 101 of the Mass Communications Building, discussing his experiences reporting wars on several continents.

A second lecture begins at 6:30 p.m. in the Senate Room of the Student Union Building.

Galloway is the only civilian awarded the U.S. Army’s Bronze Star for Valor during the Vietnam War. He later reported from the Persian Gulf, Iraq and Afghanistan, and recently retired as senior military correspondent of Knight-Ridder Newspapers.

He also writes a weekly syndicated column on military and national security affairs.