The book, written by Stew Magnuson, won in the nonfiction category and received an honorable mention in the cover/design/illustration category. 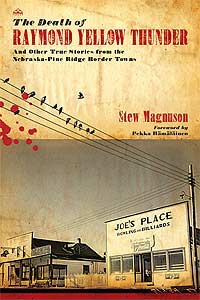 “The Death of Raymond Yellow Thunder and Other True Stories from the Nebraska-Pine Ridge Border Towns,” written by Stew Magnuson, won in the nonfiction category and received an honorable mention in the cover/design/illustration category. The cover was designed by Lindsay Starr of Austin.

“As a native Nebraskan, I consider it a thrill and an honor to receive this award,” Magnuson said.

The book, published in 2008, uses the 1972 murder of Native American Raymond Yellow Thunder by four white men to examine the history of the region that frequently erupted into riots, beatings and unexplained deaths.

After covering racial unrest in the remote northwest corner of his home state of Nebraska in 1999, journalist Stew Magnuson returned four years later to consider the larger questions of its peoples, their paths, and the forces that separate them. Examining Raymond Yellow Thunder’s death at the hands of four white men in 1972, Magnuson looks deep into the past that gave rise to the tragedy. Situating long-ranging repercussions within 130 years of context, he also recounts the largely forgotten struggles of American Indian Movement activist Bob Yellow Bird and tells the story of Whiteclay, Neb., the controversial border hamlet that continues to sell millions of cans of beer per year to the “dry” reservation.

A native of Omaha and a graduate of the University of Nebraska-Lincoln, Magnuson is a Washington, D.C.-based journalist and former foreign correspondent. He has filed stories from Mali, Japan, Cambodia, Burma, Laos, Thailand and Indonesia. Magnuson lives in Arlington, Va.

Texas Tech University Press, in business since 1971, publishes nonfiction titles in the areas of natural history and the natural sciences; eighteenth-century and Joseph Conrad studies; studies of modern Southeast Asia, particularly the Vietnam War; costume and textile history; Latin American literature, and all aspects of the Great Plains and the American West, especially biography, history, sport history, memoir and travel.