James Simpson pioneered a switch from full-time production agriculture to part-time entertainment by opening a corn field maze to the public. 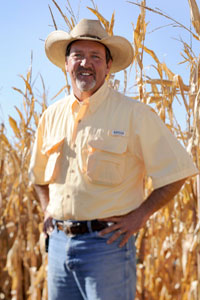 James Simpson grew up on a farm southwest of Muleshoe and completed his master's degree in entomology at Texas Tech.

Raider Red is an enduring mascot of Texas Tech University, but his likeness will soon be disappearing at At’l Do Farms.  Texas Tech alum and corn maze owner James Simpson is harvesting what’s left of the corn maze whose Raider Red outline attracted thousands of visitors to the farm this year.

The once common sounds of laughter from people enjoying hayrides, bonfires, and a corn cannon are now replaced with the eerie quietness of a crisp winter air rustling the dried corn crop.

Throughout the season, Simpson and his family didn’t mind the strangers walking through his crop because he said it meant people were enjoying themselves. Of course the farm hasn’t always been used for a maze, Simpson explained. But farming has been an integral part of his family for generations.

“This maze is on land that goes back to my wife’s great grandparents," Simpson said.

But switching from full-time production agriculture to opening a cornfield maze to the public was quite a leap for Simpson and his family.

“When we explained to my dad what we were going to do, he said ‘there ain't no way somebody’s paying to walk through a corn field,’ but I said ‘well, we’ll see.’”

Simpson realized he needed the help of someone who had already started this type of venture. After researching several corn field maze companies, Simpson contacted The MAiZE, a consulting company that helps people set up their own maze and with marketing and advertising – areas for which Simpson admitted he wasn't prepared.

“The transition to this type of field wasn’t hard as far as the agronomic aspect of it,” Simpson said. “It was the marketing and the advertising and public relations – just dealing with the public.”

The first year they tried a corn maze, Simpson said they had a great turnout, and nine years later, they show no signs of stopping.

Simpson grew up on a farm southwest of Muleshoe and completed his master's degree in entomology at Texas Tech. That bond with Texas Tech has spread to his children, most notably his son Eric, a freshman studio art major, who was recruited to draw this year’s design.

“My parents came to me saying that they wanted to do something involving the university,” Eric said. “Since it's my first year there, we really wanted to support Texas Tech.”

An iconic representation of Raider Red, Texas Tech’s rowdy, red-headed mascot, was drawn for this year's corn maze and was an instant hit with folks around the South Plains.

“Before we could even send out media releases – people were already contacting us,” Simpson said.

While running the corn maze has its challenges, members of the Simpson family said the opportunity it gives other families to get away from the hustle and bustle of city life is worth taking the time to do each year.

“Farmers have something to offer. I never thought of the heritage, the tradition, the getting-back-to-your-roots aspect of it – but so many people continue to remind us of it,” Simpson said. “Whether they are from a rural area or urban – they see it through different eyes. And that has been one of the biggest encouragements for us. That has been a big surprise to me, that people really dig this stuff! As long as we can provide a clean, safe environment for families, we’ll continue to do this.”

The corn from the maze comes full circle when this year's crop will be harvested and sold to the Department of Animal and Food Sciences at Texas Tech to be ground into feed for use at the Burnett Center Feedlot.

The Department of Animal and Food Sciences is home to leading researchers in many fields, including food science, food safety, muscle biology, nutrition, animal well being, breeding and genetics, physiology and with specialties in cattle, horse, sheep & goats, poultry and swine.