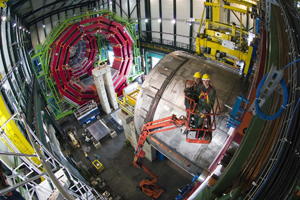 A team of Texas Tech physics researchers is preparing to test the particle beam of the world’s largest particle collider deep beneath the Jura Mountains.

According to organizers at the European Organization for Nuclear Research, known as CERN, the actual test of the particle beam will begin sometime this month.

Texas Tech has supplied many of the calorimeters for this project, said Nural Akchurin, a professor of physics and a calorimeter projector manager at CERN. Texas Tech’s High Energy Physics Group has worked on the project for 18 years, he said.

These calorimeters will serve as the catchers’ mitts that they hope will capture proof of a theoretical particle called a Higgs boson. This particle is responsible for giving mass to subatomic particles, which make up atoms and so-on until you have a pencil, a rock or a table.

"In the most vanilla version of the Higgs theory, you need some mechanism through which you give mass to electrons and protons," he said. "Finding that mechanism could close the loop in assigning known masses. If you have Higgs, you can explain everything – or nearly most things."

"This is much bigger than the atom bomb,” Akchurin said. “If this project finds nothing but Higgs, that’s huge. If this experiment finds nothing at all, I think that’s equally as big a deal because we’ll have to rethink all these other theories. Whatever comes out of this will be interesting."

Akchurin said the actual experiment, where particle beams are shot at each other and the collisions are monitored, will begin at reduced speed, then go up to full speed collisions. The time from the first circulating beams to first world-record-breaking collisions is expected to happen this year or early 2010.