The exhibit allows visitors to compare and contrast the work of current artists with historical paintings. 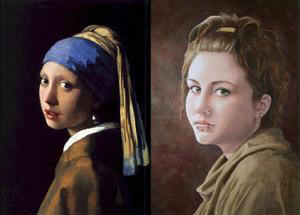 The Museum of Texas Tech University is pleased to present “The New Reality: The Frontier of Realism in the 21st Century.” The exhibit opens Nov. 8, and continues through Jan. 3, 2010.

The exhibit, which is free and open to the public, is the first traveling museum show of this century to not only look at the state of realism painting around the world, but to also compare such artworks with their historical predecessors.

56 artists are represented with 25 paintings from the United States, Canada, the Netherlands, Korea, Russia, France, Iceland, Romania, Norway and Finland in this juried show organized by the International Guild of Realism. The exhibition looks at such painting media as oil, acrylic, egg tempera, graphite and colored pencil to give viewers a snapshot of how realism artists are approaching their art form today.

Each artist was asked to identify one historical painting that can be used by museum visitors to compare and contrast today’s work with the pioneers of this art technique. The artists cited such predecessors as Ingres, DaVinci, Dürer, Vermeer, Harnett, Constable, Memling and Dali as starting points for their current work as they explored still life, landscape, figurative and even trompe l’oeil art forms. In some cases, the contrast between the old and the new is startling; in other cases, one can almost see the apprentice soaking up the Old Master’s techniques for modern visuals.

The showing is part of a national tour developed and managed by Smith Kramer Fine Art Services, an exhibition tour development company in Kansas City, MO.