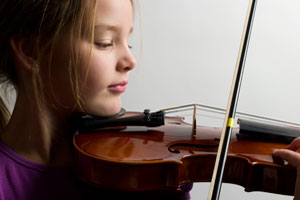 Down in a basement rehearsal room at Texas Tech’s School of Music, 14 fifth-graders stand tall with bows drawn across violin strings anxiously waiting for their instructors to turn them loose and let them make some music.

Moms and dads watch from plastic stacking chairs, sometimes silently laughing at discordant scraping or offering supportive smiles. Brothers and sisters listen as they fidget or work on homework.

Twice a week for a semester, some 50 fourth- and fifth-graders from the Lubbock area come to the School of Music for lessons on the violin, the cello or the bass. Associate professor Bruce Wood heads the String Project, a nation-wide program that educates elementary students and budding music instructors on how to learn and teach the playing of stringed instruments.

The Texas Tech String Project was founded in 2001 with the help of the National String Project Consortium and the American String Teachers’ Association. The program was originally funded by a three-year grant from the Fund for the Improvement of Postsecondary Education and matched by money from Texas Tech. The university, student instruction fees and other grants now fund the program.

Organizers offer instruction to students who are home-schooled as well as affluent and disadvantaged public schools in the Lubbock area, Wood says. The String Project tries to attract students from diverse ethnic and socioeconomic backgrounds.

For 10-year-old Ashleigh Gonzales, the class is a dream come true. The fifth-grader at North Ridge Elementary School is in her second year and says the violin has always captivated her. She hopes to play the violin just like her mother and grandmother.

“To me, the violin is very soft and light,” she said. “I want to be a professional violinist. It’s hard to play. But to me, that makes it more interesting. The boys laugh, but the girls think it’s kinda cool.”

That enthusiasm for learning is exactly what the project aims to achieve, Wood says. Along with fostering a love of music, teachers encourage the children to continue learning and progressing on their instrument, to join their school orchestra programs by the time they reach sixth grade and to audition for Prelude Strings – the youngest of the Lubbock Youth Symphony Orchestras.

Along with fostering a love of music, teachers encourage the children to continue learning and progressing on their instrument.

On this warm fall Tuesday after school, it’s more than just the children learning in the String Project.

Karissa Chervnsik, a violin music education major from Katy, is one of 11 student instructors. Though she’s only been involved with the project for a few months, she says the program has taught her much about how to succeed as a music instructor.

“I think when you can teach beginners, you can teach at any level,” Chervnsik says. “I’m learning the goofier you make something, the more kids love it. Tell them to hold their bows with their hands in the shape of a bunny face rather than a fox, and they’ll remember.”

Jackson Guillen, a music performance graduate student from Tegucigalpa, Honduras, joined the project with Chervnsik. He has taught before, and said he was impressed with the program’s curriculum and method.

“Though my area of study is music performance, it’s always good to have teaching experience,” Guillen says. “As a musician, you’re always going to have to teach at some level.”

“You get a lot of people who think they want to be a music teacher and go through the program,” Wood says. “But when they do their student teaching, they say ‘Oh my gosh, I don’t want to do that after all.’ With the String Project, students work with the children earlier and actually get a head start on teacher training. Then when they do their student teaching, that’s a successful experience because they know what they’re doing.”

Since the time of String Project’s beginning in 2001, Texas Tech has graduated 32 orchestra/string education majors – more than any university in the United States including University of Texas, University of South Carolina or Ohio State University. Of that number, 31 have remained educators.

Learn to Play; Learn to Read

The National String Project Consortium was founded in 1998 both to increase the number of children studying stringed instruments and to help institutions of higher education create qualified string/orchestra educators.

In the second year, students are introduced to music reading. They start with single line material, and progress to reading pieces like “Ode to Joy” and “Can, Can.”

“By playing and memorizing pieces their first year, and then reading their second year, we follow the same natural method as is done with language learning,” Wood said. “One learns to speak before learning to read. The aural and physical are developed first, then symbols are added.”

Wood studied how teachers interacted with and gravitated toward the “mild child,” who carefully waits for teacher instruction and takes fewer risks with learning, compared to the “wild child,” who attacks learning in a more cathartic manner.

“In many cases, the wild child has a different learning style,” he says. “And that style, to a teacher, is disruptive to the class. But that’s more of a Gestalt way of learning and that’s OK.”

Currently Wood is designing a qualitative study to gain insight from String Project beginners about their experiences in class, in terms of master teacher and project assistant teaching. “I’m interested in what the students say about their learning at the end of the semester,” Wood says. “We’re going to ask them questions about what they’re learning and what they’re thinking about learning. So often, we instruct and they do, and we never find out what they think about it all.”