“The team won its fifth contest in a dominating fashion,” said Mark Miller, professor and San Antonio Livestock Show Distinguished Chair in Meat Science. “I am proud of the excellence and focus the team members are displaying at each contest.”

Individually, Matt Bruton, a junior from Throckmorton, won the contest by 19 points. Team members Meagan Igo, a junior from Plainview, and Collin Corbin, a junior from Webster, finished third and fourth overall. The team also boasted eight of the top 10 individuals in the alternate division. 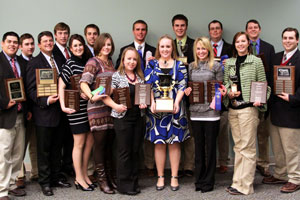 The team will compete in one more contest before the international competition Nov. 15 in Dakota City, Nebraska.

In addition to Bruton, Igo and Corbin, team members include:

The team is coached by Miller and Travis O’Quinn, a meat science graduate student.

The win at the American Royal follows a 150-point victory at the Eastern National Meat Judging Contest in Pennsylvania and victories at the National Western Stock Show, the Southwestern Livestock Exposition and the Houston Livestock Show last spring. The team will compete in one more contest before the international competition Nov. 15 in Dakota City, Nebraska.