The competition tested the contestants’ knowledge of cattle, sheep and swine as well as their oral reasons. 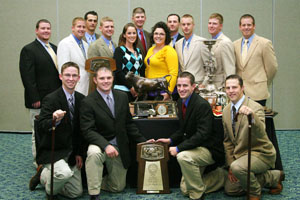 The team won the contest by a four-point margin, posting a total team score of 4,653 points. Texas A&M University, the University of Nebraska, Western Illinois University and Oklahoma State University rounded out the top five teams.

For the first time in school history, Texas Tech has won the contest for three consecutive years.

The competition tested the contestants’ knowledge of cattle, sheep and swine as well as their oral reasons.

“It was a thrilling victory because we thought we were too far behind in placings to win,” said Ryan Rathmann, assistant professor and coach of the team. “But, the team won reasons by such a large margin that they narrowly pulled it off.”

In addition to Flohr and Cammack, team members included:

The team is coached by Rathmann, Josh Campbell and Bryan Bernhard.

“I’ve been blessed with outstanding students on our judging teams, and I’ve been extremely proud of their accomplishments,” he said. “This win proved to these students that there is nothing in life that they will not be able to take head-on and accomplish with hard work and determination.”