Students showcased their knowledge in agronomy at the Students of Agronomy, Soils and Environmental Sciences National Meeting. 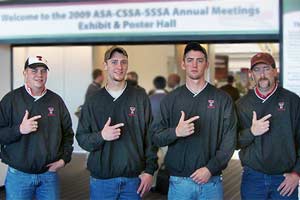 For the third year in a row, the Red Raiders walked away as national Quiz Bowl champions.>

The Agronomy Club team is coached by Craig Bednarz, a professor of crop physiology in the plant and soil science department with joint appointment with Texas AgriLife Research. The annual competition, which began in the 1960s, is held in conjunction with the American Society of Agronomy International Annual Meeting.

A variety of programs and activities are offered on the local and national level for students to become professionally involved and to prepare for their future careers, officials said.