Students Give World’s Largest Retailer Some Tips on Selling Hardware

Graduate students in the College of Human Sciences gain real-world experience by helping develop retail and design strategies for Wal-Mart. 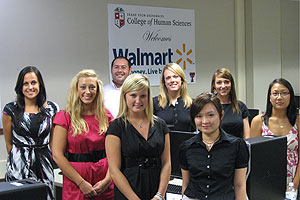 So you’re a student – a graduate student, specifically – and you’re looking for a bit of real-world experience to help flesh out your resume.

Sure, there are the internships and part-time jobs. But for a young up-and-comer looking to break into retailing, what better opportunity could you get than helping redesign a store department for the world’s biggest retailer?

Two teams of students in the College of Human Sciences tackled just such an opportunity while most students were enjoying summer vacation.

Under the guidance of Deborah Fowler, associate professor in Retailing, the students developed proposals that Wal-Mart may implement to makeover the hardware sections of two regional stores.

And we’re not talking putting the screwdrivers where the hammers used to go.

“This is a unique opportunity,” Fowler said. “I tell the students it’s like having an interview on steroids.”

An interview on steroids indeed.

The teams worked with real Wal-Mart sales and inventory data, digging through some 8000 universal product code numbers looking for trends and trying to determine which products were selling.

The students made trips to Pampa and Dumas to tour the store locations. They surveyed customers and visited rival retailers to get an idea of what worked in other hardware stores.

The five-week project culminated Aug. 10 when the students presented their proposals to Wal-Mart Stores Inc. executives in Bentonville, Ark.

This is the first time Wal-Mart has entered into such a partnership with a university program, said Max Ludwig, director of Wal-Mart's macro space allocation.

“College students get a lot of examples from textbooks, but rarely get real-life examples of how to apply the things they learn in the classroom to what is taking place in corporate America,” Ludwig said. “This really gives students a great opportunity to take a lot of the things they’ve been learning and see those applied.”

“One of the things I found very heartening about the experience was that the Wal-Mart executives treated our students as peers,” she said. “It was not a professorial student relationship. And any student anywhere in the world with Wal-Mart on their resume will do well.”