David J. Schmidly was honored with a bronze plaque commemorating his term as president of Texas Tech University. 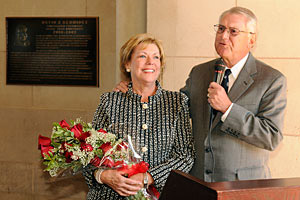 David J. Schmidly was the 13th president of Texas Tech, serving from 2000-2002. He and his wife Janet Knox Schmidly are both Texas Tech alumni.

Texas Tech has a tradition of dedicating a bronze plaque to mark each former president’s term in office. The plaques hang in the breezeway of the Administration Building.

“It’s always a good day when we can honor a former president and it is made better by the fact that David and his wife Janet are both graduates of Texas Tech,” said President Guy Bailey. “Dr. Schmidly made access and diversity, scholarly excellence, engagement, technology and community partnership hallmarks of his administration. He established programs that we continue to build on today.”

Schmidly was Texas Tech’s 13th president, serving from 2000-2002. He joined the university in 1996 in the dual role of vice president for research and graduate studies and dean of the Graduate School.

"One of the highlights of my almost 40 years of experience in higher education was the opportunity to serve as President of Texas Tech University, my alma mater, as well as my wife's. Both of us cherished every minute of our service," Schmidly said.

While at Texas Tech, Schmidly helped found the Institute for Environmental and Human Health and established collaborative partnerships with community colleges throughout the state, a program still underway today. He also helped develop a new Interdisciplinary Degree in Natural History in the Honors College and was instrumental in helping expand the National Science Research Lab. His tenure also saw the creation of new graduate centers for engineering in Abilene and Amarillo, academic centers in Fredericksburg and Marble Falls and the establishment of a new freshman orientation program.

Prior to joining Texas Tech, Schmidly served on the faculty and administration of Texas A&M University for 25 years, including five years as CEO and campus dean of Texas A&M’s Galveston campus and six years as head of the Department of Wildlife and Fisheries Sciences in College Station.

He left Texas Tech to become president of Oklahoma State University in 2002. In 2007, he became the 20th president of the University of New Mexico. During his tenure at UNM, the university has seen major growth in the incoming freshman class and significant accomplishments in the recruitment of National Merit and National Hispanic Scholars. In recognition of his commitment to diversity and in recognition of UNM’s leading role as a Hispanic Serving Institution, Schmidly was inducted as a member of the Hispanic Association of Colleges & Universities (HACU) governing board in 2008.

Schmidly and his wife, Janet Knox Schmidly, are graduates of Texas Tech. They are the parents of two grown children and two grandchildren. Schmidly holds a master’s degree from Texas Tech and a doctorate from the University of Illinois in zoology.