Engineering students take a year's worth of designing and put it to action as they begin building the car of the future. 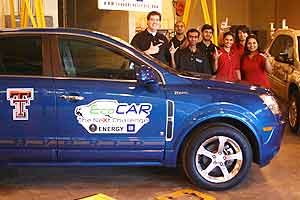 The Texas Tech EcoCAR team spent the last year modeling and designing the next-generation eco-friendly car. Now the students will turn their ideas into reality.

A team of Texas Tech University engineering students intend to prove that they are the next generation of automotive engineers. The team received a vehicle, donated by General Motors, which they will transform into a next-generation eco-friendly car.

EcoCAR: The NeXt Challenge, along with its headline sponsors, the U.S. Department of Energy and General Motors (GM), challenged 17 universities from across the U.S. and Canada to redesign and reengineer a GM vehicle to further minimize fuel consumption and reduce emissions while retaining its performance and consumer appeal. EcoCAR seeks to inspire the next generation of scientists and engineers by giving them the tools and experience necessary to design a more energy-efficient future.

In the first year of the competition, beginning in the fall of 2008, the 17 teams designed a virtual model of their vehicle using advanced software and computer modeling tools. This year, the second year of the competition, the teams are challenged to turn their cutting-edge simulations into reality. In the third year, teams will take the vehicles to the road for a series of challenges.

As the student engineers from Texas Tech embark on the second phase of the challenge, they will turn the vehicle into a two-mode hybrid powered by a 1.6L European GM 4 cylinder engine and fueled by Ethanol 85.

“EcoCAR gives students hands-on design and engineering experience,” said Tim Maxwell, professor of mechanical engineering and co-head of the advanced vehicle engineering lab at Texas Tech. “Our students have worked hard this past year, and they are excited for the opportunity to integrate their designs into the vehicle.”