The peer-reviewed study was published by Special Publications at the Natural Science Research Laboratory of Museum of Texas Tech University. 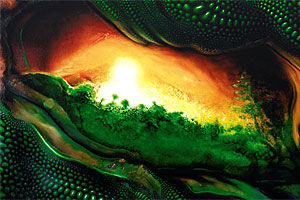 Sankar Chatterjee, curator of paleontology at the Museum of Texas Tech, says the meteorite strike near present-day Mumbai, India, could be responsible for the massive dinosaur extinction 65 million years ago.

Imagine a meteorite more than 25 miles wide hurtling toward Earth at 36,000 miles per hour. The impact would create mass extinctions, perpetual night for more than a year, tsunamis and massive volcanic activity.

It’s not a fictional plot to some Hollywood disaster movie, says Sankar Chatterjee, curator of paleontology at the Museum of Texas Tech University. In fact, the exact scenario played out 65 million years ago near present-day Mumbai, India, and could be the smoking gun that ended the dinosaurs’ reign on Earth.

Chatterjee and his colleagues recently published further evidence about the Indian meteorite impact site known as the Shiva Crater and aptly named for the Hindu god of destruction. He presented his findings at the 2009 Annual Meeting of the Geological Society of America in Portland, Ore.

Though many scientists attributed the dinosaur extinction to the Chicxulub Crater off the coast of Mexico’s Yucatan Peninsula, Princeton University scientists recently refuted this theory because evidence showed that meteor struck 300,000 years before the demise of dinosaurs.

Chatterjee said the Shiva evidence suggests the meteorite struck at the same time as the mass extinction and created enough catastrophic force to destroy 70 percent of Earth’s plant and animal communities on land and in the seas.

A Decade of Research

Chatterjee conducted a 10-year study using geophysical evidence and core samples collected by oil companies to reconstruct the Shiva Crater – a massive 300-mile-wide pock mark with a 3-mile peak as high as Mount McKinley. Though the actual crater is covered by more than five miles of sediment, Chatterjee says the geological evidence he collected allowed him to map out the crater.

It's hard to imagine such a cataclysm. But if the team is right, the Shiva impact vaporized Earth’s crust at the point of collision, leaving nothing but ultra-hot mantle material to well up in its place. The impact appears to have sheared or destroyed much of the 30-mile-thick granite layer in the western coast of India. 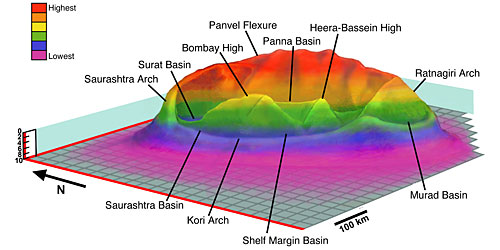 “Rocks from the bottom of the crater give us the telltale sign of the impact event from shattered and melted target rocks,” he said. “We want to see if there are breccias, shocked quartz, and an iridium anomaly. Asteroids are rich in iridium, and such anomalies are thought of as the fingerprint of an impact.”

It is likely that the strike enhanced the nearby Deccan Traps volcanic eruptions that covered much of Western India. This activity resulted in half a million cubic miles of lava flooding the western part of India in a short amount of time. The greatest lava event coincides with the meteorite.

What's more, the impact broke the Seychelles islands off of the Indian tectonic plate, and sent them drifting toward Africa.

“The Shiva impact made the western coast of India seismically active and caused the plate movement separating India from the Seychelles islands,” Chatterjee said, adding that the meteorite probably led to the sudden northward acceleration of the Indian plate, then a continent located south of the equator, to collide with Asia and form the Himalayas.

“The Shiva projectile was about 25 miles across,” Chatterjee said. “With a meteorite of this magnitude, it would create a huge crater as soon as it hit the surface. Rocks would be vaporized and send dust and debris into the air that would block out the sun.”

The fallout from the meteorite, which Chatterjee calculated to have 10,000 times more force than the detonation of the world’s entire nuclear arsenal, would place the world into perpetual night for more than a year. Red-hot rock would rain from the skies, sparking massive global forest fires and causing acid rain that would kill shelled organisms in the oceans and cause massive collapse of the food chain.

“Anything bigger than 25 pounds was wiped out,” he says. “Animals that lived in the river water, such as crocodiles and alligators, survived, but most animals on land and in the oceans were the main victims.”