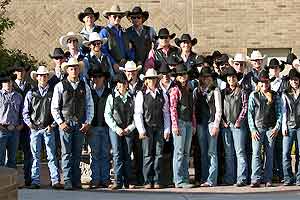 Of the six standard men’s events, Texas Tech won two events, placed second in two others and fourth in another.

“This is an extremely tough region but we have some awesome competitors on both the men’s and women’s teams this year,” said head coach Chris Guay. “I expect lots of success from each individual in their respective events and know we will be represented well at the College National Finals Rodeo next June.”

C.J. Kerr, a freshman from Paradise, tied for first in the finals and placed first overall in the steer wrestling competition. Adam Sawyer, a junior agricultural economics major from Bassett, Neb., placed second in the first round of steer wrestling and seventh overall.

Jay Manning, a senior animal and food sciences major from Ingram, and Jeremy Buhler, an agricultural leadership major from Levelland, placed first in the finals and second overall in team roping.

Bonner Bolton, a senior art major from Gardendale, placed second in the bull riding finals and second overall. Logan Allen, a senior agricultural leadership major from Crescent, Iowa, placed third in round one and fourth overall in saddle bronc riding.

The Texas Tech women’s rodeo team placed fifth at the event. The team was lead by Taylor Langdon, a freshman animal and food sciences major from Aubrey, who placed third in the finals and fourth overall the barrel racing.

Kallie Lamb, a junior animal and food sciences major from Alberta, Canada, placed third in the first go round, fifth in the finals and third overall in goat tying.