Win over Nebraska propels Tech to No. 21 in the Associated Press and No. 24 in the coaches' poll. 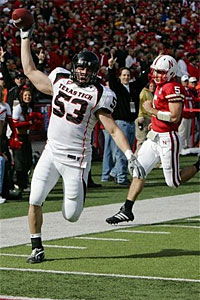 Texas Tech's huge road win over No. 15/17 Nebraska jolted the Red Raiders into the Top 25 for the first time this season as Texas Tech was introduced into the Associated Press poll at No. 21 and No. 24 in the USA Today/Coaches' poll.

The rankings are the first for Texas Tech since 2008 when the Red Raiders entered the polls in the preseason and never left them following a school record season of 11-2. Texas Tech climbed as high as No. 2 last year after wins over No. 1 Texas and No. 8 Oklahoma State and finished the season at No. 12 after falling to Ole Miss in the Cotton Bowl. The Red Raiders are one of five Big 12 teams in the national rankings.

Texas Tech will be ranked for only the eighth time in school history when facing a Texas A&M team. The two rivals collide Saturday in Jones AT&T Stadium with kickoff set for 6 p.m. There will be no television for the game, however, tickets are available for purchase through the Texas Tech Athletics Ticket Office at (806) 742-TECH or online at www.texastech.com.