Why is it moviegoers are more likely to be stifling yawns than screams as they flock to theaters for Halloween shivers? 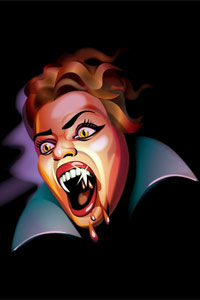 Rob Weiner believes that scary movies today have lost some of their scariness and will soon be replaced by scary films from Indie filmmakers.

Now here’s a truly chilling thought for horror directors as the season of ghouls and goblins and slasher sequels descends: their scary movies just aren’t that … well, scary.

So why is it that moviegoers are more likely to be stifling yawns than screams as they flock to theatres in search of a few pre-Halloween shivers?

“The recent slate of horror movies is pathetic,” said Rob Weiner, pop-culture author, guru and an associate humanities librarian for the Texas Tech University Libraries. “They aren’t scary. There’s nothing that captures the imagination. It’s like Hollywood ran out of ideas.”

And maybe it has. After all, how do you convince horror-savvy audiences to continue jumping at the same old bumps in the night? How much deeper can scriptwriters dig into their bag of tricks and twists and gimmicks to surprise viewers?

It’s no wonder moviemakers have increasingly stooped for the gross-out, using gore to create horror in audiences rather than reaching for more elusive and complex feelings of terror.

Yet even the so-called "torture porns" that have enjoyed a vogue in the past decade are becoming little more than a parody of themselves. Weiner said he recently saw a trailer for the upcoming Saw VI during a theater trip and heard members of the audience laughing.

So what’s the answer? Weiner believes America’s next great scare will come from the ranks of Indie filmmakers, whose storytelling more often focuses on those little details like character development.

However, he isn’t holding out much hope.

“It probably isn’t going to happen in America,” he said. “It will probably be someone we try to emulate, like we have with the Italians and Japanese in the past. Of course, I’m hoping someone proves me wrong.”

Weiner is a Texas Tech author, librarian and instructor with expertise on topics ranging from the Grateful Dead to American presidents in film. He lectures on the history of horror cinema.

His books include “Captain America and the Struggle of the Superhero,” Marvel Graphic Novels and Related Publications: An Annotated Guide, exhaustive 385-page reference work on the universe of Spidey, Iron Man and The Fantastic Four, and “Perspectives on the Grateful Dead: Critical Writings.”