Twenty students selected as the ConocoPhillips SPIRIT Scholars of 2009-2010. 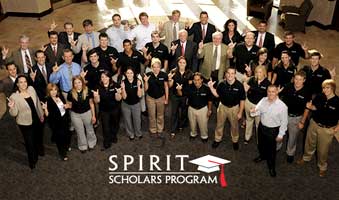 Texas Tech University has announced the ConocoPhillips SPIRIT Scholars of 2009-2010.

There are currently 20 spirit scholars at Texas Tech. Nine are returning students. For the first time this year there is one student representing the Department of Geosciences, while 13 students represent the Edward G. Whitacre Jr. College of Engineering, and the other six represent the Rawls College of Business. Six of these students are enrolled in the Honors College.

There is still time to apply for the SPIRIT Scholars Program for those who qualify. The deadline is Oct. 30.

Qualified applicants should have sophomore standing or higher with at least a 3.25 GPA and fulltime enrollment in engineering, accounting, energy commerce, finance, or graduate geosciences disciplines.