Burkhart Center welcomes Lynley and Jazz Summers, authors of 'Autism is Not a Life Sentence.' 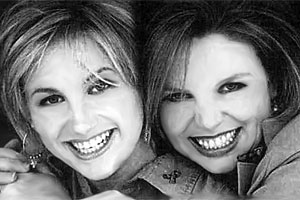 Lynley and Jazz Summers share their story of living with Autism Spectrum Disorder during the 2009 Burkhart Lecture Series.

Texas Tech University’s Burkhart Center for Autism Education and Research will host authors Lynley and Jazz Summers to speak about Autism Spectrum Disorder at 9 a.m. Oct. 21 in the Allen Theatre in the Student Union Building as part of the 2009 Burkhart Lecture Series.

The Summers also will speak at the Lubbock Memorial Civic Center Theater from 5:30-7:30 p.m.

Jazz Summers was diagnosed with autism as a child. The doctors told her mother, Lynley, she would never be able to attend a general education class or communicate effectively in spoken English. How wrong the doctors were.

Jazz Summers no longer considers herself disabled. She speaks nationwide to spread the word about autism awareness and advocacy for all people with disabilities. She has won local awards for her singing talent and has been acclaimed nationally.

She has been selected to attend the Missoula Performing Arts Camp in Montana for three consecutive years and was among 42 individuals in the world chosen from submitted videotapes. The first year Jazz Summers was selected, they did not know and could not tell she was on the autism spectrum. Even after disclosing this information during her first year at the camp, when she applied again the next year, she was selected again from the thousands submitted.

Jazz Summers was inducted into the National Honor Society in May 2005 and is now enrolled at University of Central Arkansas majoring in vocal music and performing arts.

“Jazz was diagnosed with autism at a young age, and has overcome many obstacles to become the exceptional young woman she is today,” Susan Voland, program coordinator for the Burkhart Center said. “Her mother refused to give up hope, and in the process became her daughter’s biggest advocate. Their story will inspire everyone, especially those touched by autism. The Summers believe that by sharing their story, they will help other families affected by this disorder.”