Texas Tech Army NCO Advances to the Next Level 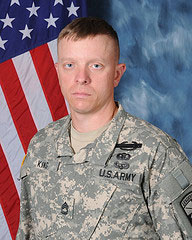 A Texas Tech University ROTC instructor is nominated for the U.S. Army Training and Doctrine Command’s NCO of 2009.

“I have competed against some truly fine NCOs throughout this year,” Sgt. First Class Corey J. King, said.

The sergeants competing for the top spot of NCO of the Year were tested during a recent four-day competition at Fort Monroe, Va. on a number of military tasks such as map reading, marksmanship, physical conditioning and other editorialized military skills.

“I am proud to have been able to compete and to be thought of as a NCO who represents other NCOs,” King said.

King will compete in late Sept. for NCO of the Year for the U.S. Army, the highest level for the annual event. Among the distinguished graduates of the ROTC program are former Secretary of State Colin Powell, Wal-Mart founder Sam Walton and Supreme Court Justice Samuel A. Alito, Jr.

King is a member of U.S. Army Cadet Command, which is the parent organization of the Army ROTC program. During King’s 14-year military career he has served in a number of leadership roles in infantry battalions and his military awards include the Army Commendation Medal and the Army Achievement Medal.