Susan Polgar will speak about the importance of chess in education to delegates from all over the world. 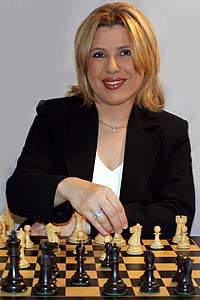 This will be Polgar’s third year to speak of the educational benefits from simply playing the game of chess.

Susan Polgar, director of the Susan Polgar Institute for Chess Excellence (SPICE) at Texas Tech University has been asked to speak at the 2009 Global Leadership Summit, a platform in partnership with the United Nations. The event will take place from Sept. 23-25 in New York City. This will be the third time Polgar has been invited to speak at the event. SPICE and Texas Tech are officially in the program agenda.

Polgar will discuss the importance of chess in education and the major impact Texas Tech’s SPICE will have globally.

Delegates from all over the world will be present at this event including heads of state, acclaimed artists, Nobel Prize recipients, global CEOs and international thought-leaders. Some of the topics to be discussed are global health, emerging security challenges, foreign policy and national competitiveness in the global age. The summit also will feature a gala and awards ceremony dedicated to leaders in politics, science, business and the arts who have made a global contribution.

This is the fourth consecutive year for the summit.

The event has already gathered a wide range of press including CNN, Al-Jazeera, the Financial Times, the Economist, BBC and the International Herald Tribune.