Students work with Nicaragua’s Minister of Tourism to conceptualize a new private art and architecture institute in a war-torn district of Granada. 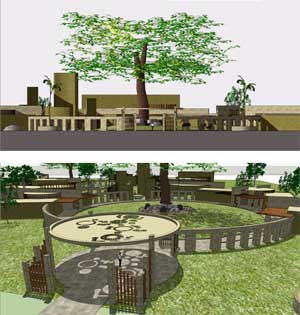 The renderings of student Edgar Gallegos was selected by Mario Salinas and the Mayor of Granada for the design of the institute. Featured above are Gallegos' entrance elevation and entrance perspective renderings.

An international study program at Texas Tech University has provided the seeds for what could become an art and architecture institute converting a war-torn district of Granada, Nicaragua, into a haven for tourists and developers.

College of Architecture students conceptualized the facility at the request of Nicaragua’s Minister of Tourism, Mario Salinas, during a seven-week visit to Granada through Texas Tech’s International Study Program.

Salinas and Granada Mayor Eulogio Mejía selected plans presented by senior Edgar Gallegos from among those of four finalists in the class of thirteen.

The private institute would be associated with the Universidad Del Diseno in San José, Costa Rica, and located on the site of former fair grounds destroyed and abandoned during the Nicaraguan Revolution.

Nicaraguan officials hope the facility would create a new node for development in a cash-strapped city looking to boost its tourism industry, said David Driskill, associate professor and associate academic dean of the College of Architecture.

“There is an almost tangible urgency in Nicaragua right now, a feeling that the country has one generation to turn itself around,” Driskill said. “So there is a real focus on youth and development.”

Driskill and Lahib Jaddo, associate professor and assistant dean for admissions in the College of Architecture, led the International Studies Program in Nicaragua. They said graduates of the institute could complete professional architecture degrees at the Universidad Del Diseno or at Texas Tech.